#WhatYouLuv Twitter Party! Plus Diapers and a $25 American Express Giveaway

This review was made possible by iConnect and Luvs. I was provided compensation to facilitate this post, but all opinions stated are 100% mine.

We have a one-year-old in the family who is working on getting potty trained. She is still in diapers too though, most definitely when she goes out, and also while she is sleeping. We know that the one thing you do not want to compromise with diapers is quality. That's why we trust Luvs, and now they have introduced their new and improved Luvs Ultra Leakguard Diapers with Nightlock plus Softener.

Luvs diapers always offer extra value for your money. From the extra stretchy tabs, to the ultra leak protection, and the money back guarantee, this is a brand that can be counted on to protect your little ones. Luvs knows that parenting can be a roller coaster, but they know moms (and dads) can take it in stride by being prepared. Having a high quality diaper choice, that doesn't break the bank (like Luvs) is one way to do so. Being a part of a family who has been using Luvs for two generations, I'd say they are definitely a diaper brand you can trust.


The above video makes me laugh because I've definitely been there. On child number four, and grandbaby number one, and with various other little sweethearts in the family who come to visit, how I prep to get ready to go to the park has definitely changed somewhat over the years. And like the woman in the video, I've definitely downsized my options for what to take on the trip. The one thing you never want to forget though, is the Luvs. :)

I think it's interesting that Luvs conducted a formal poll of parents across the country to take a look at what parenting like it really is and uncover what they truly value most. The *survey found that:

o   Nearly 2 in 3 moms have never taken a day completely for themselves.
o   81% of moms would prefer an entire day off from housework than dinner with their celebrity crush.
o   87% of moms agree that the first time their child slept through the night was one of their best parenting times yet.
o   Even a short spurt of “me” time goes a long way! A quarter of moms surveyed stated that they felt an uninterrupted shower was more relaxing than a day at the spa.
o   Other major moments moms value more now than before they became parents include sleeping past sunrise, watching television and movies that aren’t cartoons, and having an interrupted phone conversation. 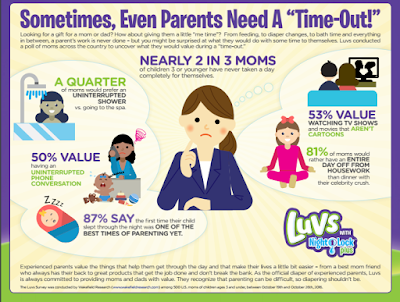 Luvs knows that parenting can sometimes be a rollercoaster ride, they also know parents are equipped to take those hills in stride, especially when they are prepared with high quality products like Luvs, that are designed to keep baby comfy and leak-free, no matter what may or may not be going on in life. 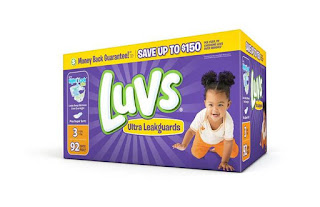 Luvs is on a mission to celebrate and embrace what experienced parents value and “Luv” every single day. Be sure to join the #WhatULuv Twitter party hosted by @iConnect and @Luvs, on November 29th, 9-10pm EST to share what you value as a parent.

RSVP HERE!
You don't want to miss this one!

And everyone gets savings with a print-at-home coupon that expires 30 days after you print it. $1 off any size package or box of Luvs diapers, excluding trial size.

*The Luvs Survey was conducted by Wakefield Research (www.wakefieldresearch.com) among 500 U.S. moms of children ages 3 and under, between October 19th and October 26th , 2016, using an email invitation and an online survey.

There's a Giveaway Here Too!

Luvs is just in the giving mood ('tis the season!), so one lucky Mail4Rosey reader is going to win a package of the new Luvs Nightlock diapers and a $25 American Express Gift Card! US entrants only. Good luck to all who enter!