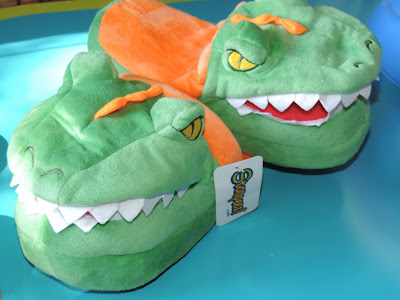 Last week one of my son's clubs had PAJAMA NIGHT. The kids and adults all had to wear pj's and slippers to the group. Robes were optional. My son was excited but concerned because he didn't have slippers. Well guess what? Surprise! Mom had a pair put away for Christmas, and I gave them to him early. Throw in the fact that they were Stompeez and suffice it to say, my son was deeee-lighted!! 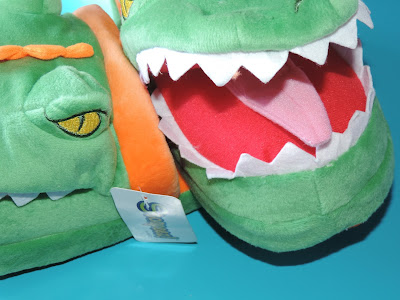 These are the slippers that when you walk, jump or stomp something on them moves. In the case of our alligators, they open their mouths. Kids love these things, which was evident the second we walked into the club and everyone congregated around my son.

Before we went to our event though, it was my turn to pick up cookies for the table, so we had to make a stop at the grocery store. My son thought that was all fun and games until he had the thought that someone from school might see him out and about in his jammies. hahahaha You know when things like that happen that the boy is getting older. ;) Evidently it's okay to go to a place where everyone is in their pj's in public, but you definitely don't want to be the lone man standing. :) 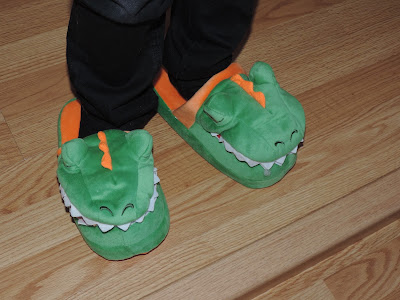 We had a great time at the event, and the Stompeez were a great hit. They're a regular staple in our house now. The first thing my son does in the a.m., is slip his feet into his pet slippers. I say 'pet slippers' because he has named them and he tries to convince them to bite people (mainly me). ;)

Stompeez come in 9 different styles including Dory, Nemo, Mickey, Minnie BatMan and more! These would make a good Christmas gift idea. You can learn more about them by visiting the Stompeez website.
on November 19, 2016