It's Called the Better Bungee for Good Reason! 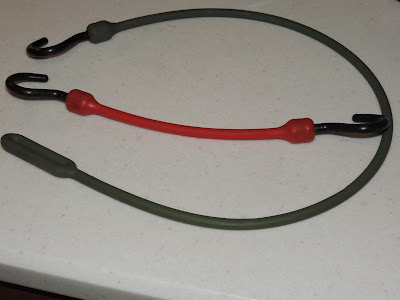 That red one in the middle looks like just a normal bungee cord, doesn't it? But nope! That's certainly a bungee cord that is better than 'normal.' For starters it will withstand extreme temperatures, ranging from -60 degrees (let's hope you never have to be in that) to 200 degrees, F. It is resistant to oils, diesel fuel, SALT WATER (hurrah!) and most household chemicals too. We haven't had ours long enough to know if it's true or not, but it also promises not to break, crack or become brittle. Double hurrah because a lot of times these are stored outside!


The Better Bungee stretches to two times its normal size and retains its shape when you're finished using it. I like it because we can take it to my good friend's house and strap our beach gear on her ocean toys without taking up precious space in her small car. We've used ours about ten times already, and though it's a bungee, it's not just any bungee! It's stronger, easier to use, and it's pretty too. :) 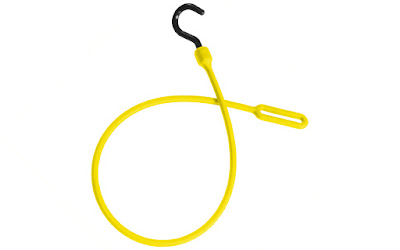 We also tested the Sych Cord (there are different styles and sizes of bungees for sale). It is a medium duty cord with a loop over one end. It's 30" long and perfect for using when 2 hooks won't work. It also works well in the storage room, or for help in organizing! You make your anchor point by wrapping the cord around a bar or through a hole, the you place that hook through the loop, pull tight and secure the hook end. It works like a charm. This particular bungee has a 2x stretch and holds up to 50lbs of force.