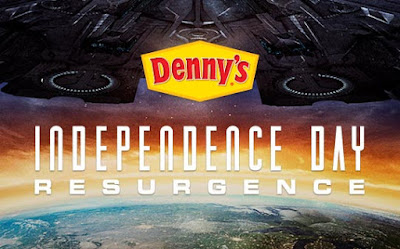 You know this is the place to come if you're looking for some great sweepstakes and/or giveaways, but this one really takes the cake!! In addition to an amazing trip to Hollywood, the winner is also going to get a $1,000 gift card to spend. This is the trip of a lifetime. I know I've never been to California...and I can't think of a better way to go!! A BIG thank you Denny's for sponsoring. Good luck to all who enter!

In celebration of the film, Independence Day: Resurgence, Denny’s is asking guests and movie fans alike to help combat an impending alien invasion by posting a picture of the group of people they would fight alongside. By hashtagging photos on Twitter or Instagram with #IDRSweepstakes, participants will be entered for a chance to win an all-inclusive trip to the movie's Hollywood premiere.

Denny’s needs your help to save the country from an earth-shattering invasion! America’s Diner is inviting fearless guests and movie fans to rise-up and join the fight to protect the nation from an impending alien threat ahead of the long-awaited film ‘Independence Day: Resurgence.’ Fans are asked to rally their troops and enter in an exclusive sweepstakes  for a chance to win an all-inclusive trip to the Hollywood premiere screening of the much anticipated motion picture event, coming to theaters nationwide on June 24.

Today, through May 27, fans can post a picture of the group of people they’d choose to help combat the impending alien resurgence on Instagram or Twitter along with the hashtag #IDRSweepstakes. Participants will be entered for a chance to win a once-in-a-lifetime, all-inclusive trip for two, including a three-day, two-night trip to Hollywood, tickets to the premiere event, a $1,000 gift card and limited edition ‘Independence Day: Resurgence’ merchandise.

“At Denny’s, we love to feed our guests more of the things they crave,” said John Dillon, chief marketing officer for Denny’s. “We’re thrilled to offer this epic experience that celebrates ‘Independence Day: Resurgence’ and gives guests and fans an exclusive taste of the movie they can’t get anywhere else.” 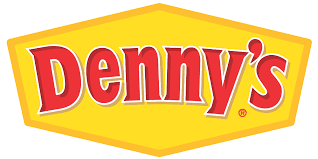 Guests will have plenty of other opportunities to enjoy the resurgence at Denny’s with the ‘Red, White and Blue Slam,’ an all-American classic brought back in celebration of the movie and featured on Denny’s ‘Red, White & Bacon’ menu. Fans will also have access to a variety of movie content available via Denny’s ‘Independence Day: Resurgence’ site, while the brand’s Instagram and Facebook channels will be posting a series of clips for followers. Plus, America’s favorite diner gang ‘The Grand Slams,’ will be getting an alien-inspired makeover in a ‘Slamsurgence’ episode featured on www.thegrandslams.com.

“We are delighted to be able to offer this unique experience to Denny’s customers,” said Zachary Eller, Senior Vice President, Partnerhships for 20th Century Fox. “This epic sweepstakes is just another great part of a fantastic integrated program Denny’s has launched in support of ‘Independence Day: Resurgence’.”

About Independence Day: Resurgence
We always knew they were coming back.  After INDEPENDENCE DAY redefined the event movie genre, the next epic chapter delivers global spectacle on an unimaginable scale.  Using recovered alien technology, the nations of Earth have collaborated on an immense defense program to protect the planet.  But nothing can prepare us for the aliens’ advanced and unprecedented force.  Only the ingenuity of a few brave men and women can bring our world back from the brink of extinction.