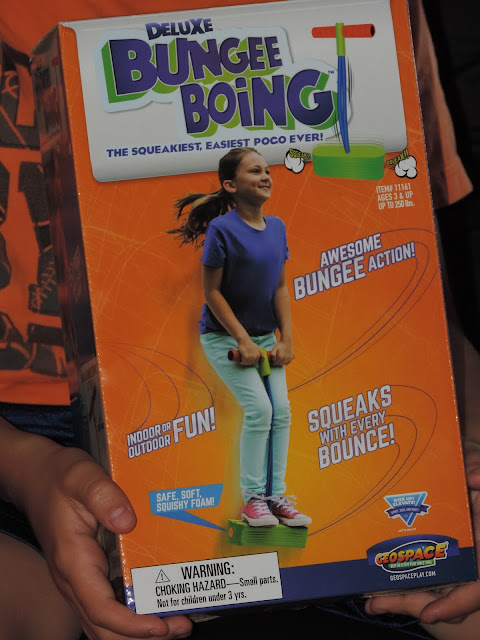 You've probably seen a traditional pogo stick, and no doubt about it, they're awesome, but now there's something new in town! The Deluxe Bungee Boing from Geospace is similar to a traditional pogo, but it safer, lighter, and easier to use. In fact, my son had it mastered on the first try. And it's fun! Every kid in the neighborhodd (and we have a slew of them) loves this toy. It is suggested for ages 3+ and I'd say that's about right. I've seen chldren from ages 5 - 14 using it, and all of them absolutely loving it.

The kicker for this one? It has a squeaker! I think that's the part the kids love most. Every jump emits a little (non-annoying squeak). The Deluxe Bungee Boing is light enough to toss over your shoulder too, so you can easily take it on the go.


The base is made of soft, squishy foam. That means you can use it outside, or inside, and if you're doing that latter, it won't damage your floors. I like the thick, sturdy base for my son's feet. It's a great way for him to have surety when he jumps.

When you open it up, already assembled, the bungee stretch cord isn't overly long so you may wonder how well it's going to work. No need to be concerned, because like I said, even the bigger kids are able to use this and have fun.