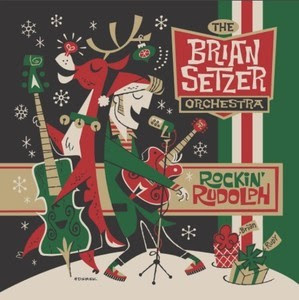 This time of year makes me happy for a lot of reasons. One of them is Christmas music! I love to sing it, play it, rock it any time of the year, but during the season I'm legit and can really crank it. Today I received a Brian Setzer Orcestra CD in the mail, and I immediately popped it into the player and danced all over the place with my kids. Orchestra music takes me way back. My very first concert, many many moons ago was an orchestra (I went with my grandmother). I loved it then, and I love it now, so this CD made me happy.

PledgeMusic, the frontrunner in the direct-to-fan platform is excited to announce the release of a new Brian Setzer Orchestra Christmas (BSO) album entitlednRockin' Rudolph, along with a special numbered and limited edition Deluxe Box Set to accompany it.

Each Rockin' Rudolph Limited Edition Deluxe Box Set is numbered, and includes:
To purchase visit: www.pledgemusic.com/projects/thebriansetzerorchestra
ABOUT BRIAN SETZER
Iconic guitarist, songwriter, vocalist and 3-time Grammy-award-winner, Brian Setzer, is a "Musician's Musician" credited with continually taking chances with innovative and daring musical styles, while single-handedly resurrecting two forgotten genres of music (rockabilly in the '80's and swing in the '90's). Along the way, he has scored chart-topping hits, sold 13 million records and received the Orville H. Gibson Lifetime Achievement Award throughout his decorated career as founder/leader of the Stray Cats, his 18-piece Brian Setzer Orchestra, and as a solo artist. He is consistently cited as one of the world's greatest living guitarists, and has a best-selling, extensive line of elite Gretsch signature model guitars bearing his name. Brian appeared in the 1987 film, La Bamba, portraying rockabilly pioneer Eddie Cochran. In 2002, Brian earned the privilege of being one of the few musicians to be animated in an episode of The Simpsons, alongside Mick Jagger, Keith Richards and Tom Petty. That same year, Setzer was personally requested to induct Chet Atkins into the 17th Annual Rock and Roll Hall of Fame. In 2014, Setzer received the distinct honor of being asked by the Smithsonian Museum in Washington, D.C. to donate a replica of his original 1959 Gretsch 6120 "Stray Cat" guitar, joining an elite collection of musical instruments at the museum including Dizzy Gillespi's trumpet and John Coltrane's saxophone.
ABOUT PLEDGEMUSIC
PledgeMusic is the number one community of artists and fans that believe in a better way to make, enjoy and buy music.
THE BUZZ
PledgeMusic was named as one of The Worlds Top 10 Most Innovative Companies of 2015 in Music for "Helping artists and fans get what they want". - Fast Company
Links:Brian Setzer:
www.briansetzer.com
www.facebook.com/briansetzerofficial
www.twitter.com/briansetzer59
PledgeMusic:
www.pledgemusic.com
www.facebook.com/pledgemusic
www.twitter.com/pledgemusic
on December 04, 2015