What do W.C. Fields & The Grinch (Grinchmas Edition) Have in Common?

Dislcosure: This is a sponsored post. All opinions stated are genuine and my own. 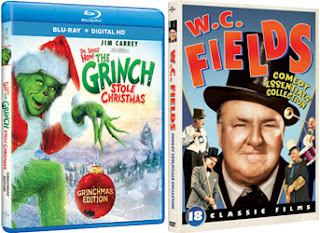 So what do they have in common? They're both new releases from Universal Studios Home Entertainment, and they're both perfect for holiday stocking stuffing (not to be confused with Thanksgiving stuffing ;) ).

We love the Grinch. When someone asks me what my favorite Christmas movie list is, The Grinch always gets a Top Five vote from me! My kids love it too, from the youngest to the oldest, and the Jim Carrey version is our favorite. W.C. Fields was a fave of my grandparents, so it holds a bit of nostalgia for me to see it released...which is fine. Nostalgia is a good thing. :)

Synopsis:
Discover the true meaning of the holiday season with the live action adaptation of the beloved classic, Dr. Seuss’ How the Grinch Stole Christmas. Starring Jim Carrey as The Grinch, director Ron Howard and producer Brian Grazer reimagine one of the most enduring holiday stories of all time.  Why is The Grinch (Carrey) such a grouch? No one seems to know, until little Cindy Lou Who (Taylor Momsen) takes matters into her own hands and turns both Whoville and The Grinch's world upside down, inside out... and funny side up.  Filled with dazzling scenery, special effects, makeup and costumes, this is an adventure “that can make your heart grow three sizes – if you’re not laughing too hard!” (Steve Murray, Atlanta Journal-Constitution)
on November 16, 2015