I have a family full of singers. My youngest sings all of the time, and his sister and oldest brother do too. We're not talking every now and again, we're talking if someone asked you who you know that sings a lot, you'd instantly say their names (if you knew them, and I do ;) ). 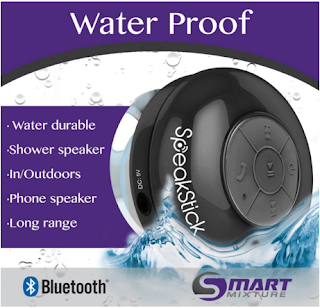 They sing in the house, in the car, when we're inside, outside, and even (or especially) when they're in the shower. So deciding who to give the new Bluetooth Shower Speaker SpeakStick to when it arrived proved a bit tricky. All of them would have loved it. And then there's me and my second oldest son. We sing sometimes...not like the others, but we still do. AND we love music too. And so the plot thickened on who to give the speaker to... not to mention the one we received was pink (so naturally one of the girls should get it, right?). Increasing our odds with the pink card is a common tactic. 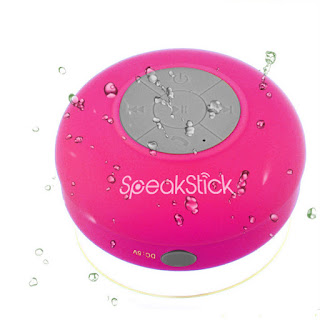 Then I mentioned the speaker once when my oldest was belting out a song. He ooh'd and ahh'd and said he wanted one of those!!! I instantly told him I had one. ;)  He didn't care that it was pink. -_-
The other day I was visiting his house. He'd already installed it (just takes literally a second or two to put on the bathroom tile), and was playing it and singing (naturally) while he scrubbed his bathroom. The sound quality was really nice! Honestly, you're probably going to be surprised when you hear it. For such a small little device, the speaker quality is impressive. I could hear the music two rooms away! It's also super easy to use, and it doesn't look obtrusive or get in the way of anything either. 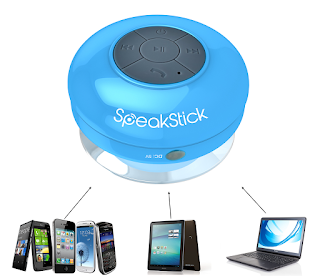 This little beauty can hang most anywhere, and you can use it inside or outside (since it's waterproof). My son hung it in his shower. You could use it while in the bathtub too. I can totally see my daughter relaxing in a bubble bath and talking on the phone (her most favorite thing to do). 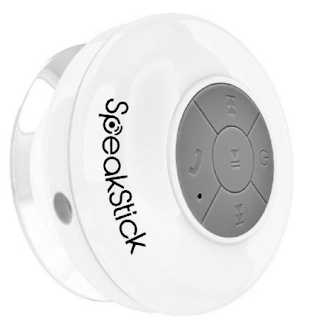