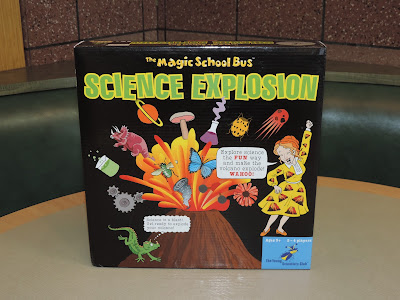 Most parents appreciate a good combo of fun-time and learning-time. What better way to do that than with a board game that incorporates science...and a volcano! 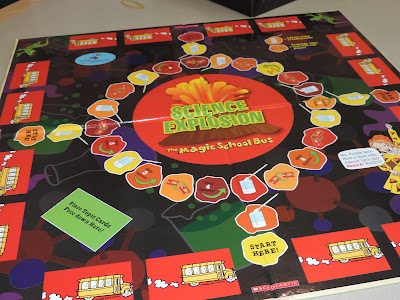 We recently opened our Science Explosion Game from The Magic School Bus. This is really two games in one. On the one side you have a game for 4 players. That's the one pictured above. 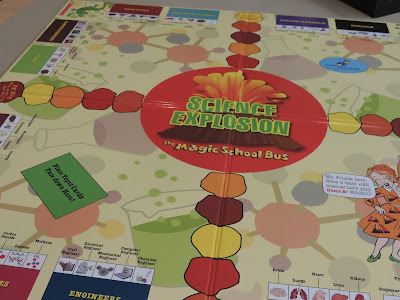 On the other side you have a game for 2 or more players. Since there were just two of us this go around, we opted for the 2-player side of the game board. 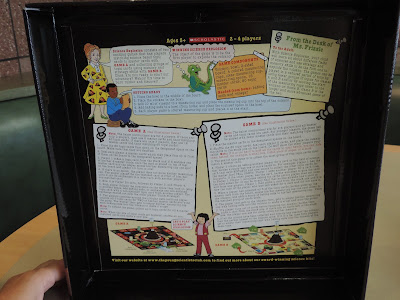 The instructions are printed right on the inside of the lid. Can you say, 'love??' No more lost directions! And they're easy to follow too. 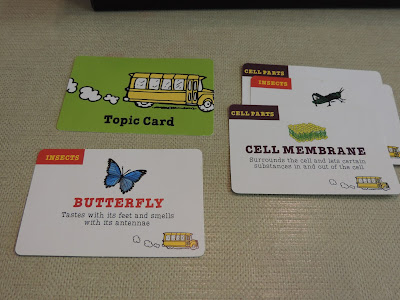 The pictures on the cards are drawn in such a way that even the younger crowd can recognize what they are, but the older crowd is still going to learn too. 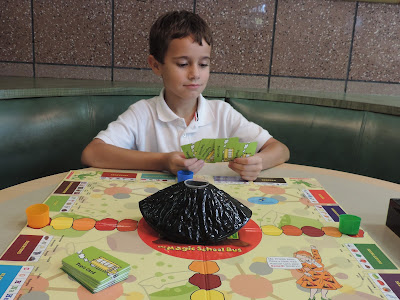 Set-up is easy. Simply place your cards in the appropriate spot on the board (its labeled), pass out five Topic Cards to Each Player, 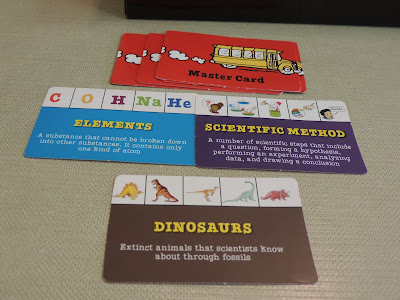 Set out the Master Cards,  which are very informative but still drawn 'fun,' You have to match five of your Topic Cards to one Master Card to get closer to the middle. 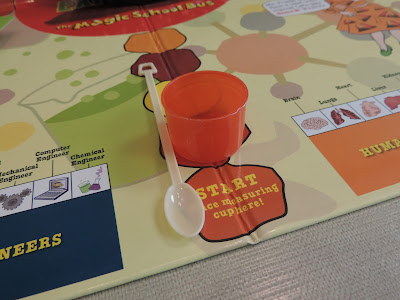 Set up the measuring cup and spoon (this is going to be a volcano!), and then... 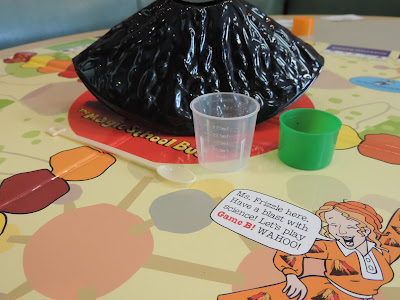 the best part, put your volcano in the middle. 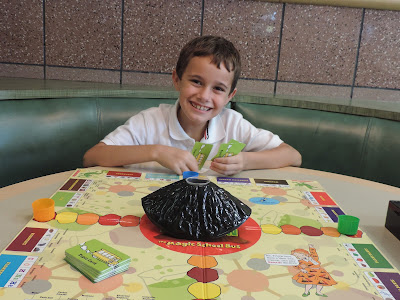 It's easy enough to play, recommended for children aged 5+. The matching game is a hoot, but it's when you're gaining your five cards to get closer to the volcano (the one who gets there will be able to spoon the vinegar into the cup that contains the baking soda), that the anticipation builds. 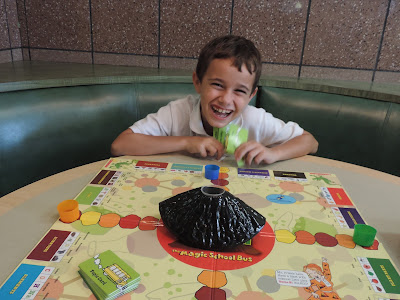 When a player still hasn't been the one to earn the chance to make the volcano erupt, but you know it's going to happen soon, the game gets downright hilarious. Everyone wants to be the one to make the eruption happen. :)

This side of the game is a matching game. You match the science-based topics to the master card. The other side is a matching and strategy skills type of game. Both are perfect for encouraging learning and a natural love of Science. Vinegar & Baking Soda not included.

New this season is The Magic School Bus Science Explosion ($29.99, Ages 5+), created after the wildly successful and award-winning Math Explosion game. This version is ideal for kindergartners and elementary schoolers. The box includes two exciting experiences -- match science-based topic cards to master cards in one game and use memory and strategy skills in another. This intriguing game comes with a large laminated two-sided board -- for fast or full-length play, volcano, bowl, 4 colored measuring cups, clear measuring cup, 16 science master cards and 80 science topic cards. Families just need to add baking soda and vinegar!
Everyone knows how urgent it is to get kids on a STEM or STEAM or even STREAM track. Math, science, engineering, art and robotics are all requirements for a competitive workforce and thriving nation. Technology threads them all together. But in this instance, old-fashioned give and take game play, not electronics, stimulate young minds -- girls as well as boys.
The Science Explosion game makes learning science facts fun and exciting for kids starting at a young age, but great to play with older siblings or parents. It joins three other new science kits from The Young Scientists Club for 2015, with two Clifford kits for kids as young as 3 years+.

We had a blast playing this game (you knew the put was coming), and I think you will too! You can learn more about this and other great learning games by visiting the website. You can also follow on Facebook, Twitter, and/or Pinterest.

One lucky winner is going to win a Science Explosion game to call their own, or they can choose one of the following kits: Clifford Water Science, Clifford Magic Science, or The Magic School Bus Growing Crystals. US entrants only.