Enter to #win a $50 Gift Card from Pacific Play Tents

Disclosure: I received a sample product to help facilitate the review. All opinions stated are genuine and my own. 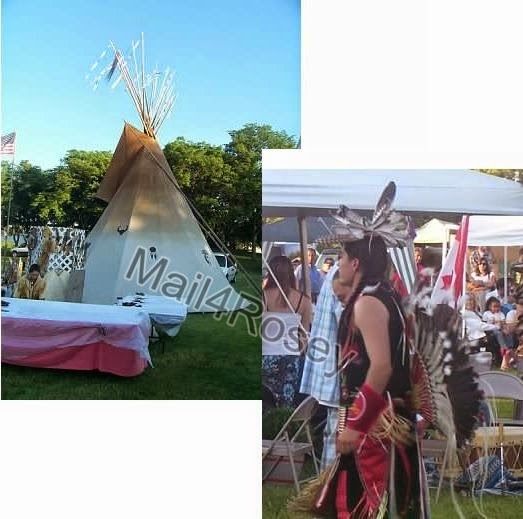 My father-in-law is a bona-fide 100% American Indian, and although my husband is secular and doesn't practice any of the culture at home, there are members of his family that do, including his older brother. Making a living through crafting, attending the pow-wows in warm weather for sales, and even learning the language are all staples for some of the members of the tribe.  One area of influence that did spill over into our home from my husband's upbringing, came in the form of our youngest son's bedroom. When we were deciding how to do his nursery (now his bedroom), nothing really appealed to us, but hubby had his own ideas, so I told him to have at it.


Little did I know he was going to paint a big Indian mural on his wall complete with sun and sky, but that's exactly what it did. He painted little scenes with wigwams, buffalo, fire, trees, etc.

My son is 7 now and his room is still done in the American Indian theme, but what's always been missing is for him to have his own tee-pee. Now, thanks to Pacific Play Tents, he has his own, very sturdy, very large, very easy-to-assemble teepee, and he loves it!


When the box arrived we went right to figuring out the set up. This tent took a mere few minutes to assemble, literally, and was so easy my son did the majority of the work on his own. In the picture above he is untying the wood poles.


Pole assembly was first on the agenda. Connecting two poles together was as easy as sliding a plastic tube over the end of one and pushing the two together (holes on the upside). Easy peasy, lemon squeezy.

Then it was time to slide the poles into the canvas structure. This was self-explanatory, though there is a short directions sheet included. The strong seams of the canvas ensure this teepee is going to maintain its shape for a very long time to come. I have many things I love about it, but that is my favorite (all parents appreciate high quality items for their kiddos).


The top of the teepee was secured into place by threading the string from the canvas through the wooden poles, and back again. We did that until it went all the way around the Painting TeePee.


Once it was assembled, the teepee stood a full 64" tall, tall enough for my son to stand up inside of it.


But of course standing up wasn't the first thing he wanted to do. He asked for a pillow and climbed in to stretch out and relax. That five minutes of assembly time had really taken a toll on him. ;) :)

I climbed in too, to get a picture of the inside of the teepee for you to see. We both fit in there fine, though only sitting up. I'm a little too tall to be stretching out like he did.


My husband called dibs on painting duty, and when he's done with his finals for school, he and little man are going to paint the same designs on the outside of the tent, that are painted on my son's wall. Four containers of canvas paint, a paint dish, and a paint brush were included with the TeePee (yeah...that's an extra cool feature!).


Since the painting is on hold for a short while, my son requested the tent be moved to his room. No problem at all...this tent is lightweight and easy to move. See that smile? My son is very happy with his new Painting Teepee from Pacific Play Tents. 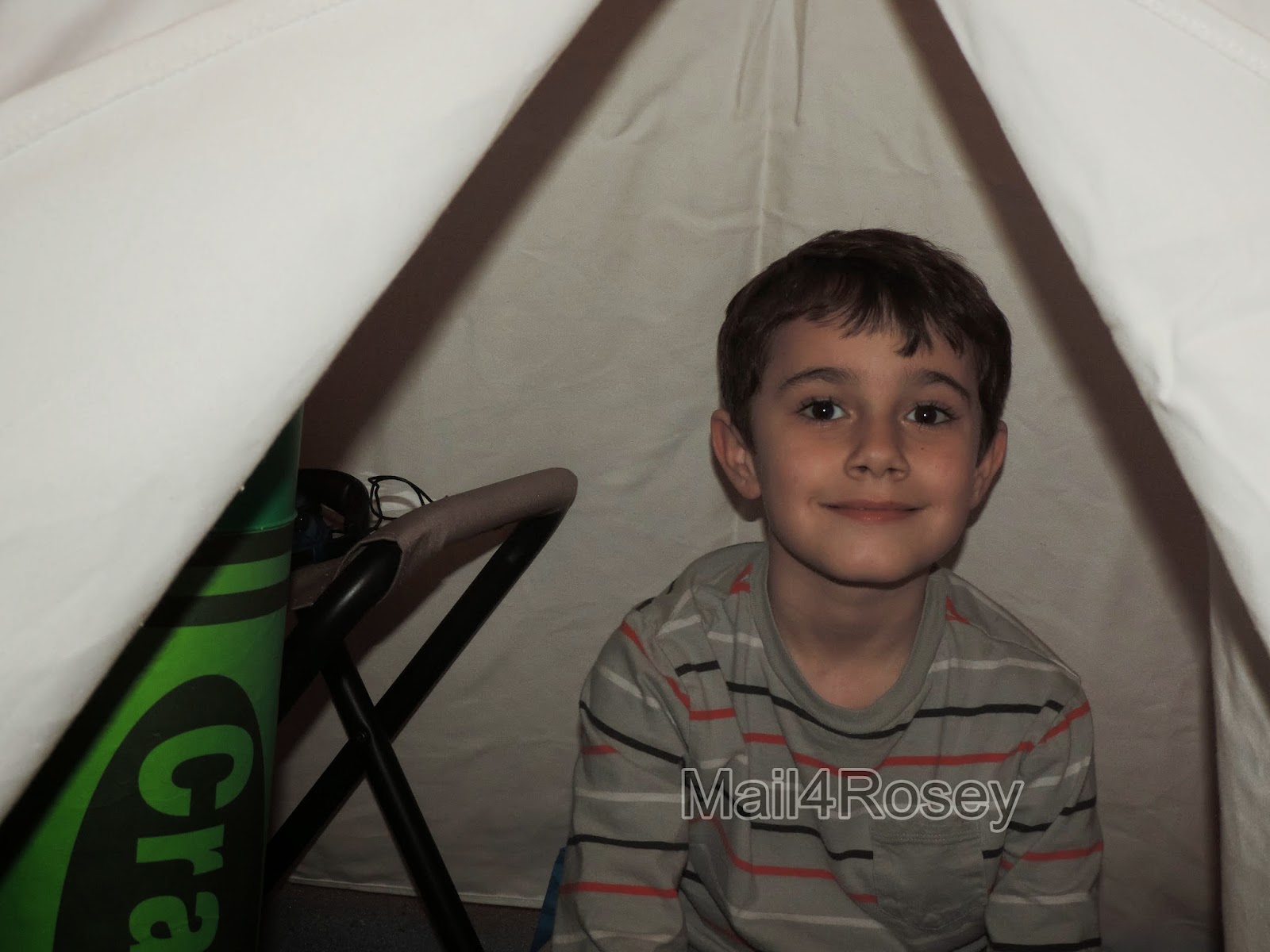 The first thing he did once we moved the teepee to his room was set up shop. That meant his big crayon bank, folding table, and his stuffed buffalo and piggies (the pigs go everywhere) were put inside. Oh, and a pillow for his bottom was requested too. ;) 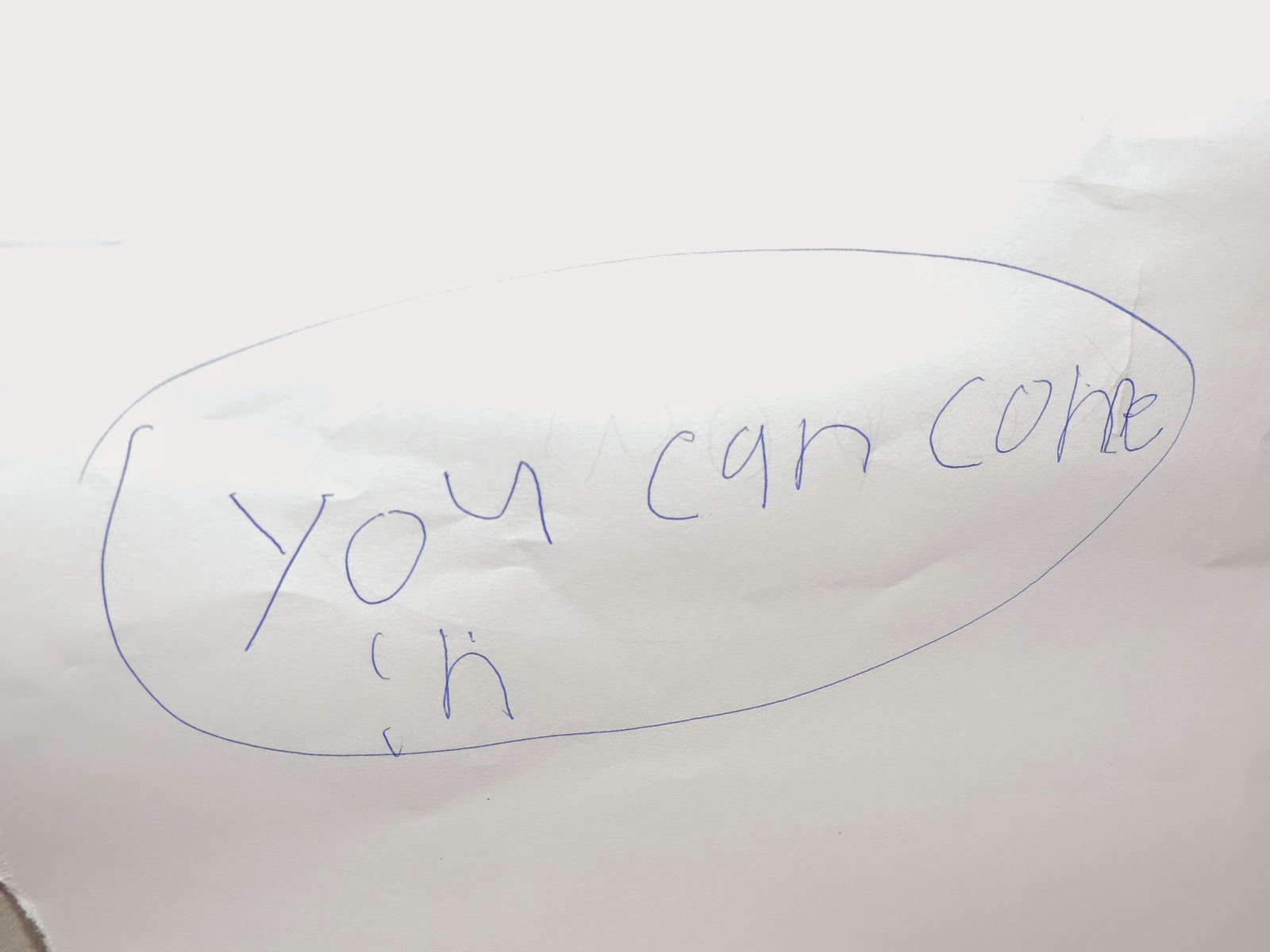 Then he drew the signs. If it's time for a visit, the 'You can come in' side is displayed. If it's quiet time, the 'Keep Out' side is shown. You can guess which side he has up most often, right? Unless he wants a little snack... then all of the sudden visitors are permitted. Mmm hmmm. :)

My son has read numerous books in his tee-pee, put on a play with his stuffed animals, and has done his homework as well, while inside. He's requested to sleep in there too, but that's where I draw the line. ;) This is a private, quiet area that can also double as a wonderful and creative place for playtime (his cousin was here over the weekend and they spent a good deal of time in the tent). It is a most excellent addition (that can be custom-designed to match) to his room, and I couldn't be happier with the Pacific Play Tents company.


Dedicated to creating the highest quality and most creative play environments for 25 years, Pacific Play Tents wants kids to let their imaginations soar. Each item is painstakingly tested to make sure a fun and safe playtime adventure can be had in a creative structure designed to last. The company’s devotion is consistently validated through annual awards such as ‘best play value’ and ‘toy of the year.’ More rewarding are the countless letters from happy parents who have shared the various stories of their children finally sleeping in their own beds (due to the bed tents) or having hours of fun pretending to be on a creative journey to the ‘land of imagination.’

One lucky winner gets a $50 gift card to spend on their website. US entrants only.