I Found a Simpler Time

I recently went to a place where it felt like I'd stepped back in time, or found my way into an old-time movie scene.

On the 3rd of July, we went to see the fireworks in town. I'm a 'close the place down, love the crowds' kind of girl. My husband is a 'let's get out of here and beat the traffic,' and 'I hate crowds' kind of guy. So we left the show before the grand finale to beat traffic.

On the 4th hubby was doing homework all day, so I went online to see what there was to do. There was a town that was a bit of a hike away, but they had all day events for the kids, and fireworks. I talked to my husband, who said he'd be happy to have the house in peace to study...and we were on our way to go close down the festivities.

When we got there, I noticed the buildings were old. That's not unusual or unpleasant in Michigan, but this was like we'd been transported into a scene right out of an old book. The town auto shop was right in the center of the action. The doors were open, and cars being worked on visible. There were two big dogs roaming around without leashes. The men my age and older were perched on fold-out lawn chairs facing the park where all the action was going on. The younger men, heads wrapped in scarves, bandanas hanging from their jeans, were walking back to their houses, presumably to get cleaned up and joined w/their families who were already out and about enjoying the holiday. 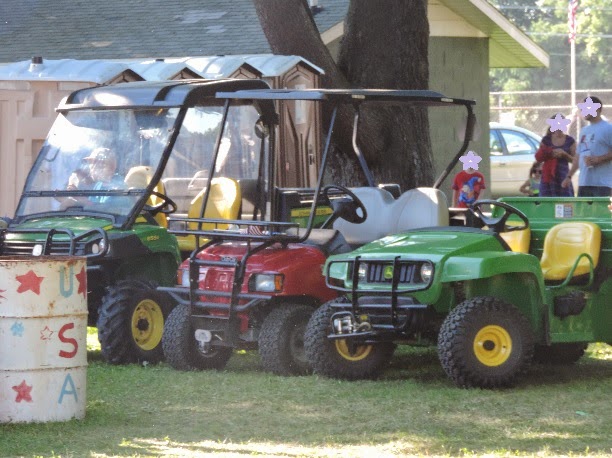 The next thing I noticed is we did not have to get there as early as we did to secure a parking spot. There were a line of cars at the park, but the majority of folks there were coming in on their golf carts, 4-wheelers, and what have you. We're talking whole families piled up on the carts, including little babies in mama's arms, driving down the road to get in on the action. 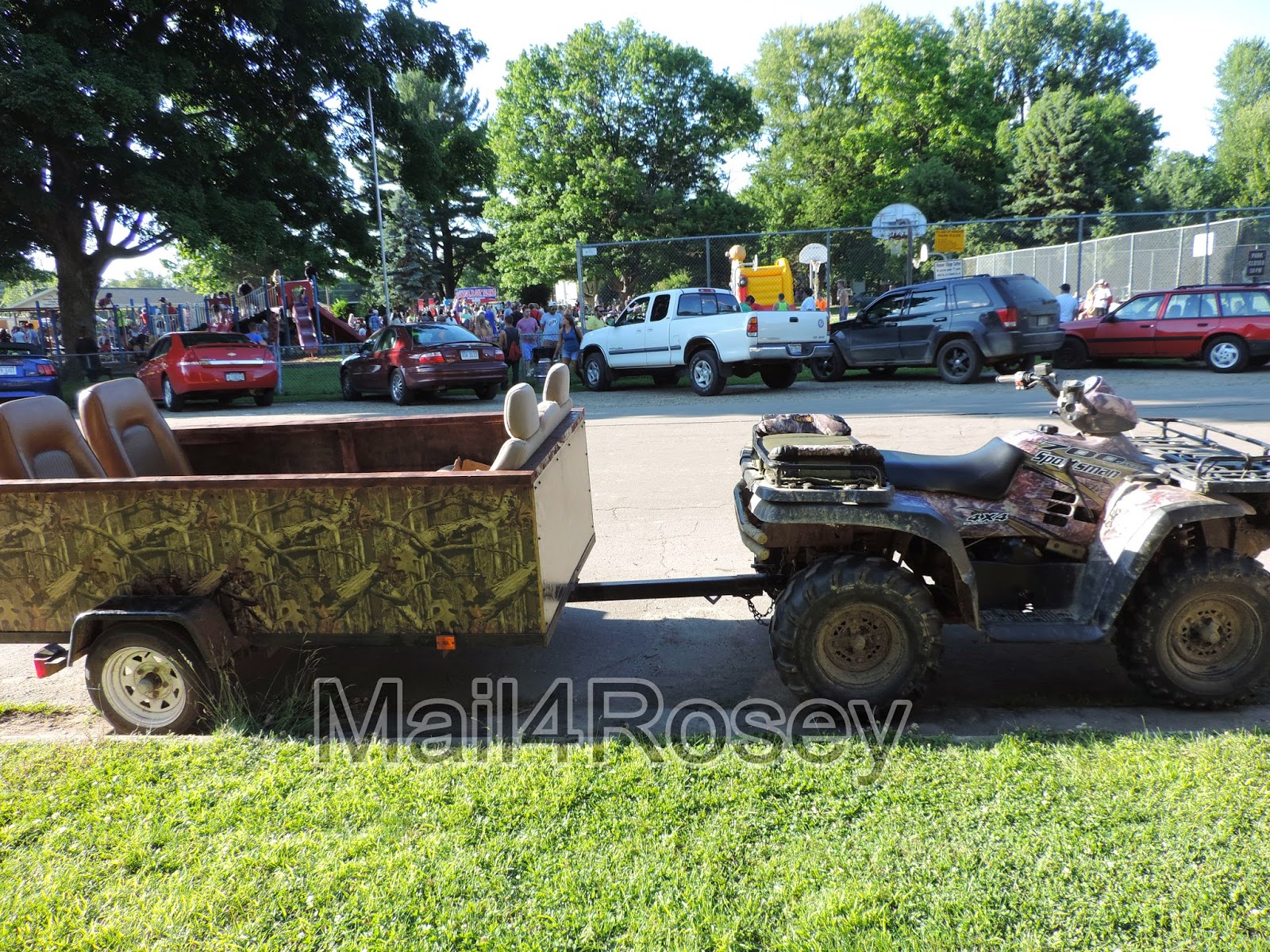 And it wasn't just for the day either, you could tell it was a normal thing because they got real creative with their vehicle designs. One guy had a machine with four kiddie cars rolling behind him; another had a big box w/seats for the family attached (painted to match the 4-wheeler), and he took up a real parking spot (most of the others just parked in the grass).

We're not talking one or two people doing this, we're talking a TON of people. Even kids (5, 6, 7 yrs. old and on up) were on 4-wheelers driving right along the main street, mingled with the real traffic.


Then I started to notice other things too. Like the whole town had turned out to watch the kids' talent show, and boy oh boy were they cheering (it was nice!). A school teacher everyone knew was MC'ing the show.

And the park was FULL of kids, including mine, all of whom were having a great time.  The little kids were playing, the bigger kids kind of hanging together, with the boys teasing the girls, and the girls smacking those boys and chasing after them full speed to distribute retribution (the boys laughing, of course!).


Then it dawned on me, I was the only one taking pictures. What?  Then I noticed it, not one person had a smart phone out!

Families were engaged with one another, talking, visiting, eating, playing Uno on blankets, etc. Teens were talking to one another. Kids were playing.

The basketball court was full all day long, with groups of boys taking turns playing games. They were playing hard too, but not a nary curse word was heard when we were around.

And when nighttime fell, I really, really noticed the men were being so considerate and kind to their women.  Whether young and presumably dating, older and married, or even elderly, men in every direction around us were heard saying things like, "I'll run back to the house and get you a blanket, babe," or "I'll go to the car and get you a jacket." One guy offered to get his gal her favorite elephant ear (the line was long!) by the time he got back, he had just one, for her, and he snuggled up behind her while she contentedly ate.  It was amazing, and definitely 'other wordly.'  No one was griping or bickering (such a nice change), no one was heard yelling at their kids (I hate when that happens, so that was a nice change too), and everyone was just content.

It was unheard of... unseen. I can't remember ever coming across anything like it in my life. It's probably the only time we'll ever visit that town, but I'm real glad that we did.
on July 06, 2014