Disclosure: Mail4Rosey was not compensated for this post, and is not responsible for prize delivery. 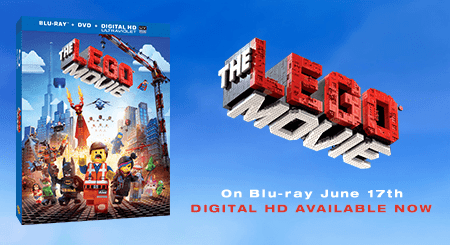 The Lego Movie gets released tomorrow, June 17, 2014! . Chances are high if you have a little boy in the house (or even a little girl) that you saw this when it came out.  My husband is not a big movie goer, and even he liked this one (didn't take much coercing at all to get him to go either ;) ).

About the Movie
The LEGO® Movie, the first-ever, full-length theatrical LEGO® adventure, directed by Phil Lord & Christopher Miller is an original 3D computer animated story that follows Emmet, an ordinary, rules-following, perfectly average LEGO minifigure who is mistakenly identified as the most extraordinary person and the key to saving the world. He is drafted into a fellowship of strangers on an epic quest to stop an evil tyrant, a journey for which Emmet is hopelessly and hilariously underprepared.
Chris Pratt (Moneyball) stars as the voice of Emmet. Will Ferrell (The Campaign) stars as the voice of his primary adversary, President Business, an erudite, anal-retentive CEO who has a hard time balancing world domination with micro-managing his own life; while Liam Neeson (Taken) voices the president's powerful henchman, known as Bad Cop, who will stop at nothing to catch Emmet.
Starring as Emmet's fellow travelers are Oscar® winner Morgan Freeman (Million Dollar Baby), as Vitruvius, an old mystic; Elizabeth Banks (The Hunger Games, Emmy nominee for 30 Rock), as tough-as-nails Lucy, who mistakes Emmet for the savior of the world and guides him on his quest; Will Arnett (Emmy nominee, 30 Rock), as the mysterious Batman, a LEGO minifigure with whom Lucy shares a history; Nick Offerman (NBC's Parks and Recreation) as a craggy, swaggering pirate, obsessed with revenge on President Business; and Alison Brie (Community) as a sweet, loveable member of the team, with a powerful secret.

And...if you've seen the movie, you've probably sang the song, 'Everything is Awesome!' I've heard children in the Kindergarten class randomly burst out with that song. :) Well now's your chance to win a copy of the video (woohoo!). Simply create a mini 6 second LEGO GIF Video using the Everything is Awesome Blog App posted below.


How to Use The LEGO Movie App:
• Move your mouse across the GIFs to control the action and play "EVERYTHING IS AWESOME" at the same time to really get crazy with it!

• Press the "record" button and make a mini 6 second LEGO GIF video that can be shared to Twitter and Facebook. Videos instantly get posted to YouTube for everybody to enjoy!

One lucky winner gets a copy of the movie to call their own. US entrants only.


Each household is only eligible to win The Lego Movie Blu-Ray via blog reviews and giveaways. Only one entrant per mailing address per giveaway. If you have won the same prize on another blog, you will not be eligible to win it again. Winner is subject to eligibility verification.
on June 17, 2014