Fotor Photo Editor is FREE and it's Awesome!

I'm not one to play with photos much. I have one photo that I can remember editing, and that was of my daughter sitting on the floor of a glass box in the Willis Tower. A man's legs were behind her, and I cloned the city view to delete those legs. That might all change now that I've found Fotor online photo editing.

The editor is free, and you can create an account or sign in with your Facebook. There is also a free mobile app, if you want to this on your phone.

To start playing around, I put a random photo in, just to experiment a bit with the site.

Here is the original picture. This is just a normal 'mom snapping her child's picture' that I took at the airport. Nothing extraordinary (except for the sweet little boy in the photo, he's pretty extraordinary to me ;) ). I randomly selected it to put it Fotor's free online photo editor, and went to work to see if I could spruce it up a bit.

That was so easy to do that I decided to explore a little more, and I went to the Fotor Montage option.

The montage was fun! You could select a good number of photos to create your montage, and then you could have them randomly filled, or you could put them where you wanted. You could resize and move the pictures too. I selected seven random pictures from a folder on my computer and let the random selection place them.

To make the montage even more fun, I selected one of the (many) cool options on the sidebar. This option was 'funky' and there was a heart in that category. I chose that, and I love it!

There are so many options on Fotor, that I couldn't help but play around just a little bit more.  The above picture is created from one of the many options in the Fotor tilt-shift category. You can see on the left side bar (of the top picture) some of the other ways I could have made the picture appear. 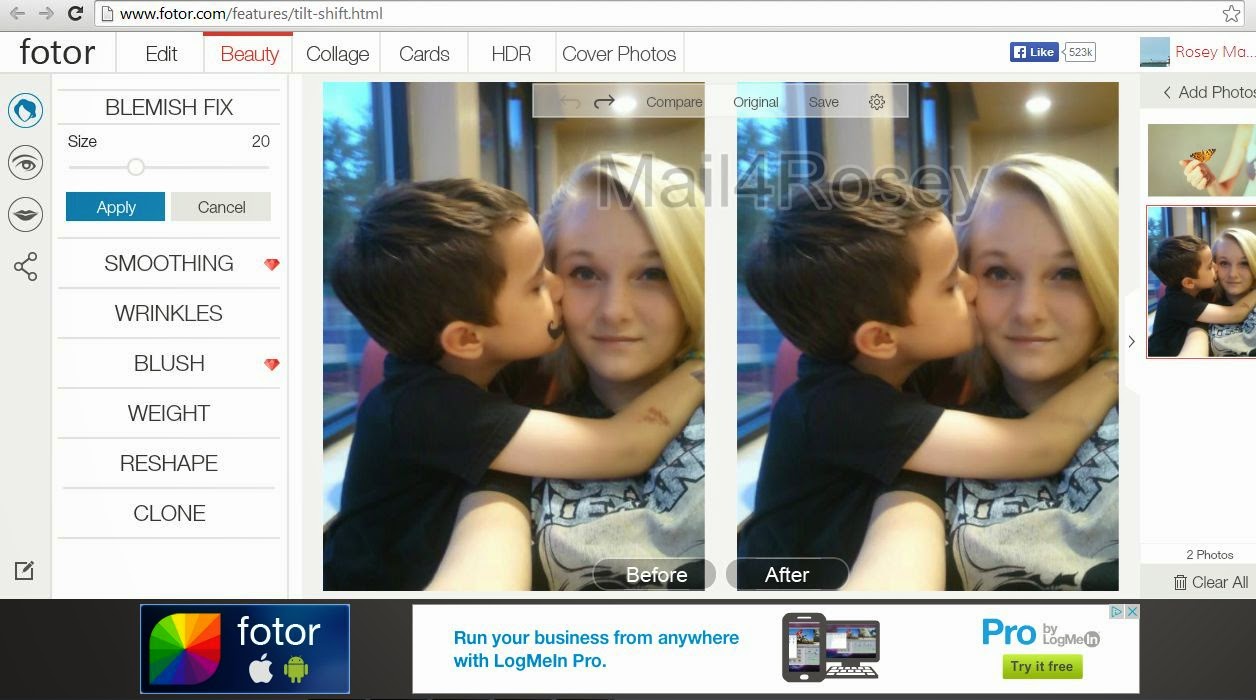 There was a 'Beauty' option on the Fotor site too (under the tilt-shift category), and I played around with it a bit to see how it worked. I selected a photo of my two youngest...the one on the left being the original and the one on the right being the re-do. You can see the kiddie tattoos on my son on the left (his mustache under his lip, and the tatts on his arm). I think the fake tattoos add to the charm of the photo ;)  but I was just testing options out, and a quick couple of clicks (and if I took time I could make it better) took the tattoos right off.

I've just started to explore this site, but I can tell it's going to be fun to learn more about it.  I saw an option to make cards, and I love photo cards, so I'll be exploring that some time soon, I'm sure.  The things I've shown you are really just the tip of the iceberg. If you're looking for a many-options, high quality, cool photo editor, that's 100% free, I suggest heading on over to Fotor. You can use it for photos on your computer, or you can use it for photos that are on your Facebook, Flickr, Dropbox, or Picassa (to name some of the other options). You can also use webcam effects to edit photos! In short, I can say I love this site, and I think I'll finally be jumping on the photo editor bandwagon, because some bandwagons are really fun to be on. :)
on June 30, 2014