Disclosure: Mail4Rosey was not compensated to help promote this post and is not responsible for prize delivery. 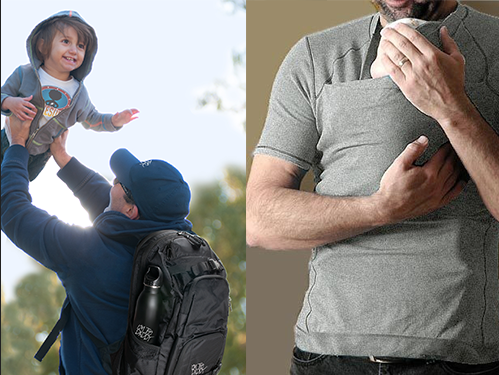 A few weeks ago at my church, I was sitting in the hallway, watching the sermon on the monitor, waiting for the right time to go in that would not disrupt the service. All at once, two doors opened and dads walked out with their little ones. They were rocking, dancing, singing, to them, etc. It was funny because you usually expect that to be the moms (or at least I do).  Then, the doors kept opening with more and more dads filling the waiting area with their little ones while the moms stayed in the service.

And it's not just at church. Look around in public and you'll see the dads carrying the little ones as much as you do the moms; dads feeding the little ones; and dads even taking the kiddos to the bathroom for a diaper change. Dads are just flat out more involved than they have ever been before, and I think it's awesome!!

Now Daddy & Company has come up with a way for dads to become even more involved if they want to be, in the bonding/carrying process, very similar to baby carrying.  The Men's Kangaroo Skin to Skin t-shirt allows dad the opportunity to baby wear.  How cool is that????

Right now they're giving away not only that, but also a Daddy Diaper Pack.

Enter to win both on their Facebook page (and tell your new daddy, or daddy-to-be friends too!).  Only a couple of days left for this one!