The commercials for Disney's upcoming movie, Frozen make me laugh, and it's a movie the kids and I are anticipating seeing at the movie theater.

Courtesy of Disney, here are some activities and printables for you to do with your children. I'm thinking we're going to make these snowflakes when the kids get home this afternoon. Seems appropriate, since we got our first snow last night (something the kids were excited about, but mom and dad...not so much). ;) 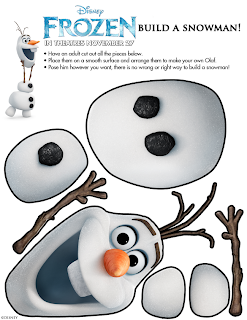 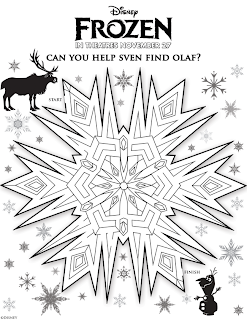 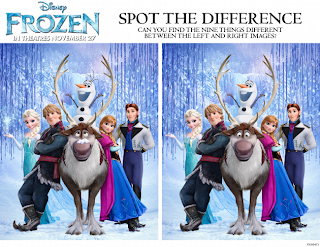 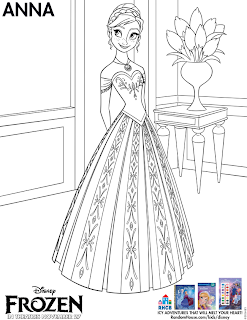 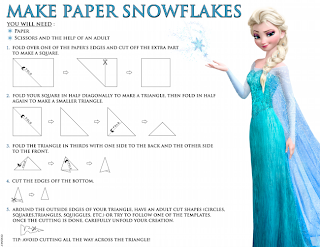 Walt Disney Animation Studios, the studio behind “Tangled” and “Wreck-It Ralph,” presents “Frozen,” a stunning big-screen comedy adventure. Fearless optimist Anna (voice of Kristen Bell) sets off on an epic journey—teaming up with rugged mountain man Kristoff (voice of Jonathan Groff) and his loyal reindeer Sven—to find her sister Elsa (voice of Idina Menzel), whose icy powers have trapped the kingdom of Arendelle in eternal winter. Encountering Everest-like conditions, mystical trolls and a hilarious snowman named Olaf (voice of Josh Gad), Anna and Kristoff battle the elements in a race to save the kingdom.

The film is directed by Chris Buck (“Tarzan,” “Surf’s Up”) and Jennifer Lee (screenwriter, “Wreck-It Ralph”), and produced by Peter Del Vecho (“Winnie the Pooh,” “The Princess and the Frog”). Featuring music from Tony® winner Robert Lopez (“The Book of Mormon,” “Avenue Q”) and Kristen Anderson-Lopez (“In Transit”), “Frozen” is in theaters in 3D on November 27, 2013.

In “Frozen,” fearless optimist Anna (voice of Kristen Bell) teams up with rugged mountain man Kristoff (voice of Jonathan Groff) and his loyal reindeer Sven in an epic journey, encountering Everest-like conditions, mystical trolls and a hilarious snowman named Olaf (voice of Josh Gad) in a race to find Anna’s sister Elsa (voice of Idina Menzel), whose icy powers have trapped the kingdom of Arendelle in eternal winter.

NOTES:
·       Kristen Bell has starred in a variety of films, including the comedies “Forgetting Sarah Marshall” and “Couples Retreat,” and the upcoming films “Hit & Run,” “Some Girls” and the Farrelly Brothers’ “Movie 43.” On the small screen, Bell is currently starring in the Showtime series “House of Lies” alongside Don Cheadle; she has also starred in “Heroes” and “Veronica Mars.” Broadway credits include “The Crucible” and “Tom Sawyer.”
·       Idina Menzel, who won a Tony Award® as best actress in a musical for her role as Elphaba in Broadway’s “Wicked” (2004), landed her first role on Broadway in 1995 in the Tony Award-winning musical “Rent.” Film credits include “Enchanted” and the feature film “Rent.” She has appeared in a recurring role on TV’s “Glee” and recently released “Idina Menzel Live: Barefoot at the Symphony,” a live concert with an orchestra led by composer/conductor Marvin Hamlisch. Menzel is currently on a North American concert tour.
·       Jonathan Groff appears in “C.O.G.,” which is part of the 2013 Sundance Film Festival. Film credits include “Taking Woodstock,” “Twelve Thirty” and “The Conspirator.” TV credits include Fox's “Glee,” the Starz series “Boss” and CBS’ “The Good Wife.” Groff received a Tony® nomination for his performance in the Tony Award®-winning musical “Spring Awakening,” and appeared in the Public Theater’s revival of “Hair” and off-Broadway plays “Prayer for My Enemy” and “The Submission,” among others. He made his West End debut in Ira Levin’s “Deathtrap,” and appeared in the 2010 Tony Award®-winning “Red” by John Logan at the Mark Taper Forum.
·       Robert Lopez is a three-time Tony Award®-winning writer of the Tony and Grammy® Award-winning musical “The Book of Mormon,” which was co-written with Trey Parker and Matt Stone (“South Park”), and the musical “Avenue Q,” which ran for six years on Broadway and four years in London’s West End. Lopez teamed with wife Kristen Anderson-Lopez, whose Drama Desk-winning show “In Transit” is Broadway-bound, to write original songs for 2011’s “Winnie the Pooh,” a stage version of “Finding Nemo” and a new musical called “Up Here.”
·       Director Chris Buck helmed the 1999 Disney classic “Tarzan” (with Kevin Lima) as well as the 2007 Oscar®-nominated “Surf’s Up” (with Ash Brannon). His animation credits also include 1989’s “The Little Mermaid,” “The Rescuers Down Under” (1990) and “Pocahontas” (1995).
·       Director/screenwriter Jennifer Lee is one of the screenplay writers of this year’s hit arcade-hopping comedy adventure “Wreck-It Ralph.” Her screen adaptation of John Steinbeck’s “The Acts of King Arthur and His Noble Knights” is being produced by Troika Pictures. She has an original screenplay in development with Leonardo DiCaprio's Appian Way, and her original script “Lucid Dreams” was optioned by Wolfgang Peterson's Radiant Productions.
·       Peter Del Vecho’s credits as producer include 2011’s “Winnie the Pooh” and 2009’s “The Princess and the Frog.” He served as associate producer for “Chicken Little” and “Treasure Planet.”
on November 12, 2013