Disclosure: This is a #sponsored post. All opinions stated however, are genuine and my own.


Over the years we have been to quite a few First birthday parties where a child has taken the cake, or piece of cake designed just for them, and smashed it all over the place, resulting in a room full of aww's and paparazzi-like flashbulbs going off left and right from friends and family's cameras. Of my four children, all of them have had their own little cake, except for the oldest whom we were not smart enough to do that with... and not one of them has made a huge mess!

My oldest was extremely delicate, barely touching his frosting at all, and six years later his brother was exactly the same. For my daughter we went all out and had the party outside to really let her go at it...nuh uh, nothing. She loved cake, but she wasn't smashing any of it anywhere, she wanted to use her spoon.


Our last child didn't have a big party. We'd moved to a new state, didn't know anyone but family on my husband's side, and that's who came. It was a nice little get-together in our basement. I baked a traditional-sized cake for the family, and a separate little cake for my son...just a square big enough to squish and cover himself with at will.  He was more interested in the candle. ;) 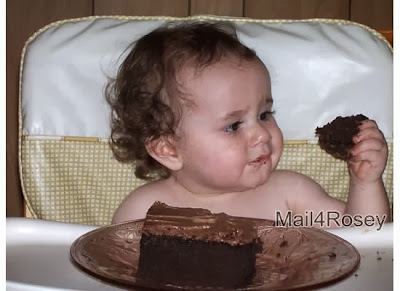 He'd never had cake before, but after cajoling him a bit to try it, we did manage to get him to break a piece off and give it a whirl.  You can see from the look on his face above that he was still a little wary. He never did eat much more than what you see in that picture. He and his siblings just would not make a mess with their birthday cakes. Not a one of 'em.  I wish they'd have been as neat with keeping their bedrooms clean.


Giving the littles their own cake has become such a fun hit nowadays that Betty Crocker has come up with their own line of really cute First Birthday Smash Cakes.


You can find the recipes and the templates for a whole line of super cute Betty Crocker First Birthday Smash Cakes here. I think if I were going to make one it would be the one above. Maybe the confetti would have enticed my precious littles to explore their cakes a little more than they did. :)


The steps to making the Smash cakes are easy and if you're making the birthday cake too, you could design them to match one another (or make it something completely unique to baby). You can find great ideas and templates for the Betty Crocker First Birthday Smash cakes here.