Letting Go: It's His House Too!

Scenario #1
Countertops... and flat surfaces (like the bathroom sink, the top of the refrigerator, etc.): I like them clear.  Hubby thinks if there's a space open it should be filled, hence the bathroom sink in our master bath is covered with stuff (mouthwash, deodorant, aftershave, shaving cream, etc.). I have to move all of that stuff several times a week to clean it, and therein lies the difference, I think, hubby doesn't have to clean it, so it doesn't bother him.

Plus, I like things to look clean. When the counter tops and other surfaces are covered with stuff it looks cluttered. I don't like it. 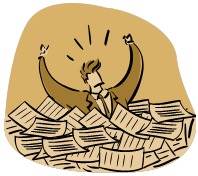 Scenario #2
My desk...I like it in a space, my space, and I want it clean.  Hubby's spread out all over the dining room table doing homework everyday and a). it's cluttered and looks terrible  b). It renders the table useless for meals and me and the kids have to eat in the kitchen c). everyone has to 'shush' while he's in that room working, or go to a different part of the house.

I bought him a desk for his birthday last month. That way he could be in a nice corner, neat and organized in the room and we could still use the room and the table too.  He took the desk back to the store and got something he really wanted. He's still at the table.

Lanaya over at Raising Reagan has a 'Letting Go' series going on, and it's a good reminder that getting worked up over small things is just plain silly.  The two things above fall into that category for me.

How I Resolved These Things

Scenario #1
Of course it seems obvious, but when you have such big differences, and one is you like things clean and the other person thinks you should utilize all space (in my eye that's cluttered), these things can be abrasive. It's not a new issue, it's been going on for years. I hate it cluttered, he thinks my idea of clean means, "Where the heck is my stuff now???" (because it's in its place and not right at his fingertips).  He's not going to change (and should he even have to?), I've got to just let it go.

It is his house too.  That means I don't get my way all of the time.
What gives me the right anyway to think everything should be my way? He certainly doesn't get that luxury. None of us do. 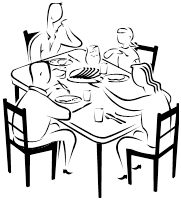 Scenario #2
Give up the ghost. He's not moving, he likes to work there, and it's where he's most productive. I'm not doing my part as a supportive wife trying to move him to a desk where he doesn't think he'd be as happy. Worst case scenario, which is probably how it will play out, I lose the use of the room and table for dinners for a couple of years. The trade off is he's happy (very important), feels like he's improving something in his life, and he's upstairs instead of in the mancave where he used to be (which I didn't complain about, but didn't like when it was excessive either).  AND we do have the perfectly fine table in the kitchen where we've been eating. It's smaller ...a nice little round table, so dinner with the kids is cozier, more fun, and far more personal than the big open table in the dining room.  It's a fair trade off, in fact, hubby could be doing me a big favor! Now that I'm typing it out I realize how much I like that new kind of time at dinner.

I'm letting go, and in the long run, that's sometimes better for everyone (in these two incidences, it's definitely better for me). :)

If you're 'letting go' of something too, and want to link up at Lanaya's, you can find her post here: http://raising-reagan.com/2013/10/22/furniture-routine-problem-letting-go/

We've got lots going on today, but I'll swing by and visit back later tonight or tomorrow. Have a great weekend everyone!
on October 26, 2013