Formal is Out of Style (isn't it?)

I like formal, and I know that's hopelessly outdated, but I do. I like formal homes, even though our house only has one room that is decorated in a formal manner and it sticks out like a sore thumb from the rest of the house (and of course, it's my favorite room). I like formal dress (I'd have probably been in my glory days in the older era where everyone regularly dressed to the nines). And I like a formal table (though that never happens at our house). There's just something about being crisp and clean and elegant and pretty (or handsome, as the case may be) that makes my day.

Formal is not the 'in' thing though. My oldest wears expensive brands (cuz he's grown and pays for them himself ;) ), all casual. My teen daughter owns more jeans than dresses (by far!) and rarely dons the latter, and my husband lives in jeans and a tee-shirt. My 20 yr. old son has a flair for dress-up once in awhile (and he looks great when he's dressed up), but he wears mostly casual wear too. 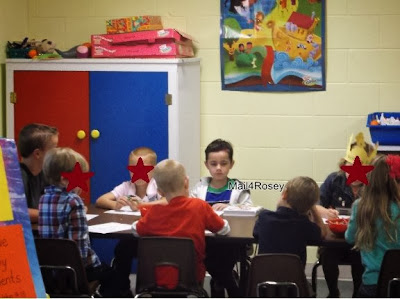 Does anyone remember getting dressed up every Sunday for church? My mom broke out her lipstick even, something she only did for special dinners out or church. And on holidays like Easter or Christmas, it was all out to the nines, hats included. Today none of the children dress up for church, at least they don't at ours. The photo above is my son's Sunday School class. I used to put him in a suit but he was the only one, so I stopped doing that long ago. Kids don't want to be the odd man out. 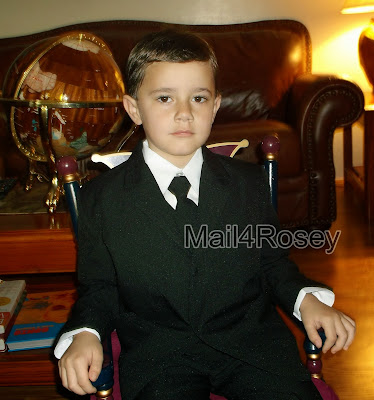 Today was picture day. I always put the youngest in a suit for picture day. It's a grand excuse to get him all dolled up, and I love it.  Clearly you can see from his expression in the picture above that he was thrilled too. hahahhahaha. He was worried he'd be the only one in a suit. I assured him that others would be wearing them too. And they were. When we walked into the school this morning, there were a couple of people all dressed up (mostly girls), but I'd guess somewhere along the lines of 95% of them were not.

I don't know what happened to liking the dressed up look, but I sure like it. That being said, since I became a SAHM I dress casual 99.9 % of the time myself. And such is life. :)  Have a great Friday everyone!
on October 11, 2013