The other day I wrote about a day outing my son and I took to see a movie (where we learned about the D-Box experience). That day was more than just a fun outing, it was also my little man's birthday! 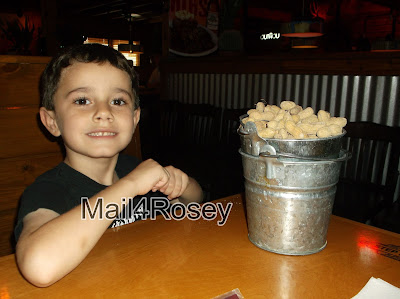 Everyone had something to do until dinner time, and I'm far too antsy to wait that long to celebrate. So...we took in a movie, and then went to lunch at the Texas Roadhouse.  We don't have that restaurant close to where we live, so my son was delighted to find out he could eat peanuts and toss the shells on the floor when he was done. I heard once that the peanut oil is good for the floors. I don't know if that's true or not, or even where I heard it.


Last year when it was my son's birthday the staff at a restaurant sang to him while he was looking around to see who's birthday it was, hahahahaha, best video ever!!  This year, he did much better, and Texas Roadhouse knows how to do up a birthday.  This lady yelling was our waitress, and she got a really good tip. ;)

Another big event happened this week...school started!  Little man is repeating Kindergarten again this year...our choice. This was such a hard, hard, hard decision for us. The teacher left it in our hands last year whether or not to pass him. He was doing fine with his work but was noticeably under-confident in doing it. I saw the same thing on the soccer field. He was basically a year younger than everyone else (he's on the birthday bubble), and that can make a huge difference in Kindergarten. I saw that with my own two eyes. 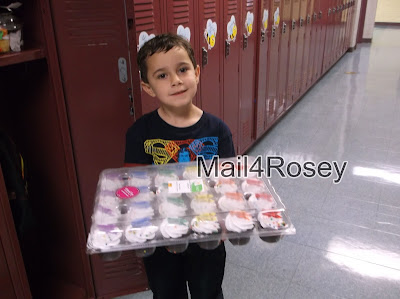 A big thank you to Joyce from Catch My Words who gave me so much clarity and help when I was trying to make this decision!!! Joyce is a school teacher, and she was a big, big help to me on making one of the most difficult decisions I've ever made regarding my youngest. I knew in my heart of hearts when I made the decision it was the right one. Just a couple of days into the school year, I've had that reaffirmed several times. He is already showing confidence this year (he knows what he's doing this go around), he's the same size as everyone else now (lol!), and it's just the right fit.


Because his birthday is right before school starts, he never gets to celebrate in class...or so we thought. Since today was his turn for Show & Tell, and to bring a treat, we got permission to bring in birthday cupcakes, that I lovingly made from scratch bought at the Meijer bakery (hahaha, I just thought of Rachel's post). This was a big deal!  He was really happy when we went into the room today and the kids were oohing and ahhing over his treat. His Show & Tell items (he's allowed to bring 2) are a forty-nine cent finger light, and his new belt that he's wearing. Hahahaha. All the toys he could have brought and he took his sister's finger light, and wanted to show off his belt.  He's a real keeper, I really like that kid. ;)

And the school year is off and running, woo hoo!! Grandma and Grandpa are picking him up from school today, to take him out for a birthday dinner and give him his present (they were out of town for his actual birthday). His first time ever going off without mom or dad, and he's excited. It's going to be a good day for my little one, and that makes me very happy. :)
on September 05, 2013