Disclosure: We received a sample product to help facilitate the review. All opinions stated, however, are genuine and my own. 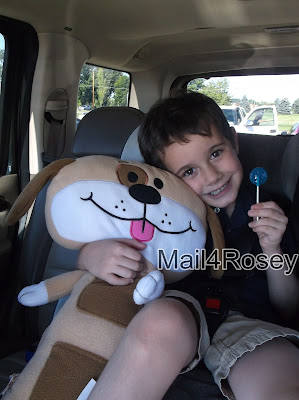 My son LOVES the commercials for Seat Pets and every time it comes on, without fail, he says he wants one. Imagine his surprise when I gave him the dog (his favorite) a couple of days ago,without warning.

Right away he wanted to test it out, which we did. He's too young to go out sans carseat, but he brought it along to snuggle and snooze. The Seat Pets have three pockets, one that zips for storage, which means everything can be tucked nicely into one spot. And they're nice and comfy. I like it for the car (for older kids who are not in the carseat), and I like it for the snuggle factor.

Mostly, I am anticipating its use on our next long airplane flight. It has a strap to carry it across your back (like a backpack), and it's very lightweight, so at 5-yrs.-old, my son can carry it with ease. The pockets mean my son can carry his things with him, have them in one spot. The support it offers means his head won't be hanging while he's trying to sleep (I hate when that happens, it's so hard to position them so they're comfy while they're sleeping in a car or airplane). You can see from the picture that it's nice and long too, almost a body pillow for the little guy.

Ours is in the house now and has a name (never mind the cute name it came with, that's irrelevant at this point), 'Doggy Dog.' I'll let you guess who named him. Hint: It's the same person who named his fish 'Fishy Fish.'

Have you seen these around? Would you use one in the car? My teen loves it and wants to steal it. I told her it's her brother's. She said she wants one for Christmas. I believe her...she takes a pillow anytime we're in the car longer than a couple of hours. :)  And...she may just get one, who knows? We'll leave that up to Santa Clause. ;)

You can learn more about Seat Pets by visiting their website here: https://www.seatpets.com
on August 26, 2013