I Don't Care! Can You Be TOO Laid Back? 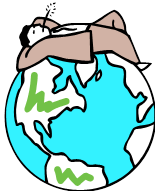 If you don't care, are you TOO laid back?

I'm talking about not caring what others are doing/not doing?  If it's not my kids, and no one's being hurt, I don't care. I don't mean it in a bad way, au contraire, I just mean it in a 'to each his own' way, and of course there are exceptions.

Last night a good friend of mine was on a roll telling me about things that were driving her nuts. She laughed at something I told her and said, "I know you! None of this would even bother you." I agreed.

"You are TOOOOO laid back and that's why people take advantage of you!"

I admire strength in people. But I think strength comes in different forms for different people. I stand up for myself, my rights, and my husband and kids: always. It's never even a second thought.

But if you're playing your radio while others around you are working, or your lipstick is purple, or you like to eat a chicken lunch at the desk (as long as you're not in a place where clients/customers/students come in) and it makes the room stink, I don't care. Have at it. :)  That doesn't make me tooooo laid back, or someone who is taken advantage of, it just leaves the 'offender' lucky that there's one less person in the room grouching at them. ;)

I'm thinking the general population is split right in half with this (with people who care about little things, and people who don't). Even my house is split...with two people who get easily irked, and four of us who, if it's not hurting someone, 'don't really care.'

So as part of an informal, and completely useless survey, just to amuse myself...which side bears more weight for you? Do little things get to you more often than not? Or do most things just roll right over w/o a second thought?
on August 09, 2013