Disclosure: Mail4Rosey did not receive compensation to help promote this giveaway and is not responsible for prize delivery. 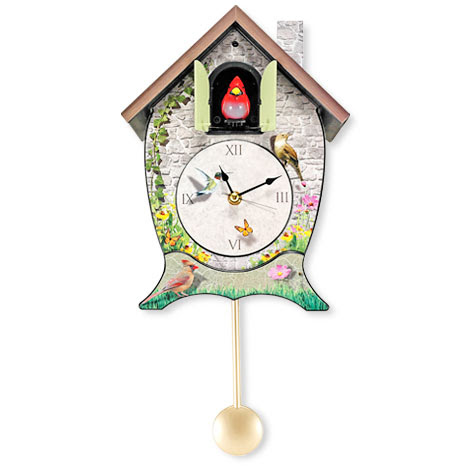 Brings you the opportunity to:

My mother-in-law loves cuckoo clocks and has one of the biggest, most fabulous ones that I've seen. I am quite positive that when she sees this post, she is going to love this one too!

There are literally hundreds of types of clocks on today’s market. Talking clocks, clocks that show the time on your wall or ceiling, clocks that run backwards, clocks that are automatically corrected by a signal generated by a pulse from a mountain in Colorado, clocks that play motorcycle sounds at each hour and even clocks that will turn things on and off for you.

All of these clocks serve a purpose. But, there never has been or never will be a clock like a cuckoo clock. Think about all the things that a cuckoo clock has to do every half hour and every hour, every day, every week, every month, every year!


It has to, open a door to let the birdie out, call out the half hour or hour depending on the time, operate a low pipe bellow, operate a high pipe bellow to generate the cuckoo call, stop the operation, retract the birdie in it’s case and close the door. If it is a musical version, it has to play a complete tune as well. It is expected to do this every day, every hour, every half hour, every week and so on…….……. We ask more from this little guy than clocks costing thousands of dollars that stand seven feet tall and get more repair and maintenance attention than a clock that works harder for it’s owner each and every day of the year.

In the middle of the 17th century, Germany's Black Forest began to become known for its clock makers. The mountain people of the Black Forest had always been skilled at working with wood , and once they teamed with the mathematically skilled clerics of the region, they began to produce some remarkable clocks made entirely of wood. Franz Anton Ketterer is most often credited with building the first cuckoo clock, around 1730. He was able to re-create the sound made by the cuckoo by using a bellows that produced two different sounds.

Most of the early designs were simple, consisting of square clock faces painted with watercolors. Over time, designs became more advanced in ornamentation. The cuckoo's wings and beak were made to move, and some of the birds were even adorned with feathers. By 1808, 688 clock makers and 582 clock sellers inhabited the the Triberg and Neustadt districts. Clocks were made during the winter months when farms were covered with snow, and clock makers had plenty of time to create the finely detailed hand-carved cases that housed the cuckoo. The resulting pieces were sold in the summer all over Europe.

The peaceful cottage scene depicted on this richly-detailed clock captures the lush beauty of what nature has to offer, and takes you away from the hustle and bustle of the daily grind.  Adding ambiance, at each hour, a Cardinal pops out from his roost, chirping his distinctive, beautiful song.  This unique “cuckoo” feature provides a sense of serenity.  The clock features a swinging pendulum which can be removed for mantel or tabletop display.  Ideal in the kitchen, living room, den, or office.  At nighttime, a light sensor deactivates bird song allowing our Cardinal friend (and you) to catch some sleep!

To Purchase Mark Feldstein & Associates, Inc. Products:
We apologize for any inconvenience, at this time we sell direct to licensed retailers only.
To locate a retailer near you who carries our products –

1. Locate the product that you are interested in purchasing on our website by entering the name
or item number in the search field

2. Once results have been displayed, click on the product name or image for more  detailed
information

4. Results shown reflect retailers that have ordered this product from using within the last 6
months.

5. If no results are returned, we recommend that you expand the search distance from your zip
code.

This giveaway is in no way endorsed, affiliated or associated
with Facebook.