Disclosure: This is a sponsored post written by me on behalf of the Museum of Science and Industry. All opinions stated are genuine and my own.

A resounding theme with parents over the summer break is that they want their children to be able to keep learning and still have fun. The Museum of Science and Industry-Chicago has found a great way to help! Promoted on social media as #MSISummerbrain, the Summer Brain Games is a free online science club that allows your children to create experiments with items that are generally already in most homes. These experiments can be done in large part without adult supervision, so kids can take it upon themselves to see the experiment for the week and get busy creating and learning when they feel like it (and not just when you have time to participate and/or help).

Registration and participation is free, and the 8-week program runs from June 8, 2013 - August 12, 2013. Each week you will be provided with a new experiment or science challenge that can be easily performed at home. Instructions are available in both English and Spanish.

My children are enrolled in the free program and we've been having a lot of fun with it.

The Week 1 Balloon Racers was the first experiment we tried and we liked it so much we have done it several times since. The first time we gathered our supplies and took them with us on one of our trips to the lake.

The kids taped one end of a string to the community BBQ pit, and the other end to the picnic table, blew up the balloons, and followed the rest of the very easy to follow instructions for testing their balloon racer. 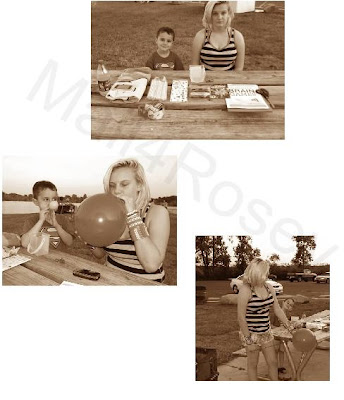 It worked so well that the next day the kids decided to set up the same experiment in our backyard.


This time, however, they got fancy and made the string much longer, and put a container with a plastic guy in it to see if the force would push him along for the ride (and it did!).

What they learned from the experiment was that as air rushed backwards out of the balloon, it would push the racer in the opposite direction with the same amount of force (Newton's Third Law of Motion at work), and they learned that for every action there is an equal and opposite reaction.  Kid science at its finest, and lots of giggles were had too. This was fun for both of my children, one aged 14 and one aged 5. The second experiment we are working on right now, and it is the Week 3 Tetrahedral Kite. Made very easily (and making it is fun too) out of things we already have at home, such as straws, tape, pipe cleaners, tissue paper, and tape, we didn't have to purchase one item to begin our work on this experiment (nor did we on the first one we tried). 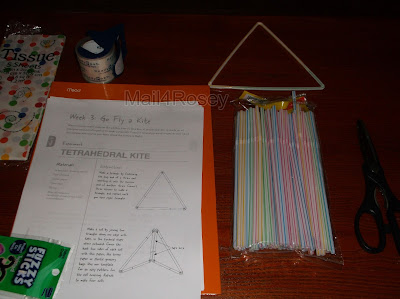 The instructions are in a simple to read format with awesome diagrams, and there's a template to download if you'd like further help as well. 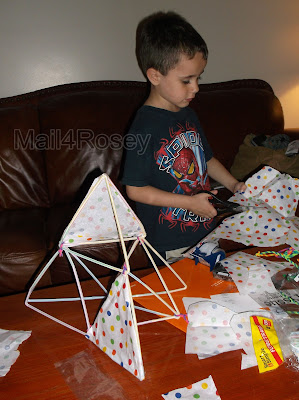 My 5-yr. old is cutting out the paper and carefully taping it to the triangles. He's taking a lot of care with the work, and I know he's enjoying it.

What we'll see happening with this experiment is again, Newton's Third Law of Motion where for every action there is an equal and opposite reaction. The lifting force when flying a tetrahedral kite comes from catching and deflecting air. Air cannot pass through it, so it gets blown down at an angle through the tetrahedral cells. The downward movement of air will cause an upward force on the kite, causing it to lift.

We'll be taking this kite with us to the trails tonight to give it a go, and the anticipation is almost as fun as conducting the experiment. We're having a really good time with the Summer Brain Games science program. I highly recommend it!! It's an easy, fun, free, creative way to encourage a love of science and continued learning for your children over the summer break.

You can learn more about the Museum of Science & Industry by visiting their website here.

If you haven't been to the Museum of Science and Industry in Chicago, it's an absolutely fabulous place to visit (you'll love it and your kids will too!).  There is a giveaway below for a family four pack of general admission tickets to the museum ($76.00 value). Giveaway ends July 9, 2013. I encourage you to enter if you live in, or will be in the Chicago area. Remember though, the Summer Brain Games are free for everyone worldwide to register and use.

The Chicago Museum of Science and Industry is offering a fun and free online science program called Summer Brain Games. The eight-week program lasts from June 17, 2013-August 12, 2013 and features a weekly experiment or science challenge that can easily be performed at home with kids of all ages.

This is a sponsored post written by me on behalf of the Chicago Museum of Science and Industry.