Controversial Cover (or meh, who cares)?

Sometimes I enter giveaways. Not often these days, but I still do it.  As a consolation prize to some great and wonderful thing I was entering for (who knows what, lol), we received a one-year subscription to Rolling Stone (magazine).  Not to impugn the magazine content, but truth be told I haven't read one of them yet (though others in the house have picked them up). 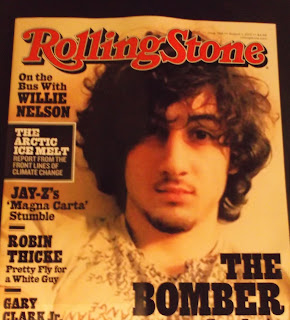 This week, however, when the magazine arrived in the mail I was a bit shocked. Why is he on there?  I see Willie Nelson, Jay-Z, and Gary Clark, Jr. on the sidebar...why not have one of them grace the cover instead?  This is not a pop star, culture icon, or even a political figure gracing the cover, it's a person who decided to make deplorable and completely unacceptable choices that hurt (and worse) way too many people. I don't think he should be celebrated with a cover photo on Rolling Stone magazine.

I instantly remembered a saying from years ago, beauty is only skin deep. In a millisecond, the phrase took on a whole new meaning for me.
on July 18, 2013