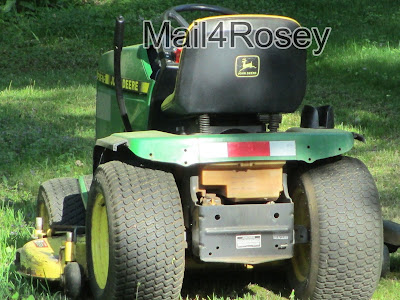 When my husband and I were dating he used to say wonderful things to me like, "When we're married, I will take such good care of you." One of the add-ons to that at one point was, "When you're sick, I'll bring you soup, I'll rub your back..." and so on and so forth.

In reality, when I'm sick he puts his shirt over his face and crosses his fingers in front of me like I'm a vampire telling, "Don't come near me, I don't want to get sick!"

But now John is sick...and trust me, this is a big deal.  This means hubby will have to use the push mower because I can't start it, lolol

I knew something was wrong with him (John), but I thought the poor guy just needed a battery after sitting in the garage all winter.  I bought him a new battery. $50 worth of new battery.

I did all of the weedeating around the house, and then it was time to mow.

John made it to here: 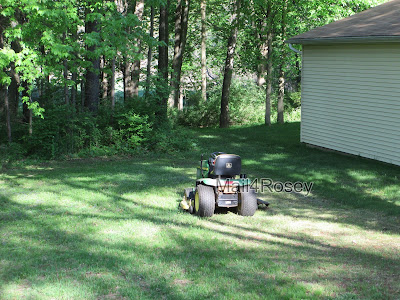 "Let it sit awhile, maybe it'll get enough charge to drive it back up to the house," hubby said.

John has a problem, and I'm guessing it probably killed the new battery we bought him too (grr).

Today the riding lawn mower doctor will come to take John away. I hope he can fix him and bring him back soon. We miss him already.
on May 16, 2013