Yesterday I posted a tribute to the military and expressed our gratitude to those who have, or are still serving. It was a touching day for us, and one we enjoyed despite the chill in the air (at the end of May!) and the constant rain.

At lunchtime I stepped outside for something and even with it raining, I could clearly hear a neighbor standing   outside, playing Taps on his bugle. WHO DOES THAT??? It was so surprising that I was transfixed. It was an amazing, touching thing, and I hated when it was over. I suspect it was the older gentleman down the road who had his flag flying half mast, and was most likely a member of the military.

Just as he was finishing the neighbor next door stepped out, in his dress uniform (police) and gave a wave. I suspected, and later it was confirmed that he was going to participate in the Memorial Day tribute.


Then we headed out with our little family to enjoy the public festivities. The outdoor BBQ was cancelled due to rain. The inflatable bounce house, face painting, and such were also cancelled due to the rain. The tribute and parade were still going to go though, and we didn't want to miss it.

It was amazing how many people showed up, despite the constant rain, and I thought that was really awesome. 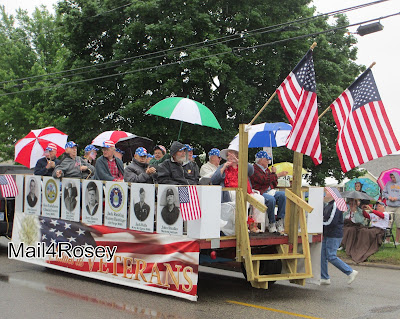 One float in the parade was comprised of a group of older veterans. They were riding on the back of a truck with a flat back (like for a hay ride), sitting on their bench seats in the rain, waving to the crowd. On each side of the truck were large pictures of the members when they were younger, in their military uniforms. I thought that was really cool. An older woman was sitting up front singing God Bless America. When it was time to leave, our car was parked in the lot with a retirement bus and workers were helping those same people from the float dismount from the truck and make it to the bus. That made it even more touching to me, for some reason. 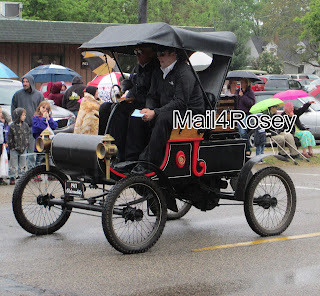 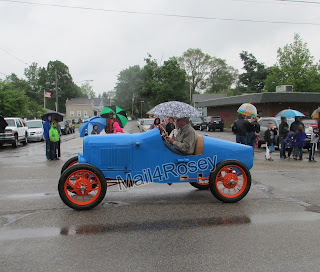 Remember I lived in South Florida for 18 years, so John Deere was not a household name. Sure, we knew who he was, but Ron Jon had more meaning. ;) So... to see the way things work up here, with the fairs, parades and such always makes me laugh. But I'll tell you, I'm starting to like it.

The grand finale' was the firetrucks, but just before them, making their grand entrance and exit was a looong line of tractors.  Two different tractors had women riding in the little seat on the back.  Again, in the rain, lol! 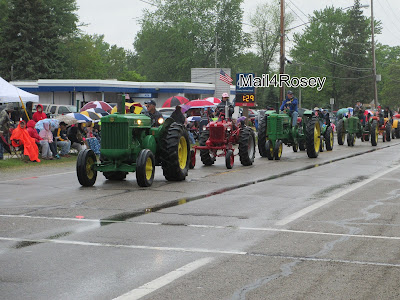 It was a good time, and a nice way to spend the extra day off in the week.
I hope everyone who celebrates the day had a good one.