Do You Use the Phone for Phone Calls? 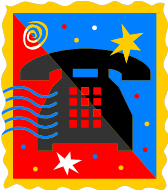 I distinctly remember how much joy the telephone brought me when  I was a kid, mostly in middle and high school, but before that too.

When I was growing up, every home had a phone.  Every phone had a cord.  And every house with a child had a parent who told them to stop pulling that cord so far while they were talking on it.

Calling my grandparents was always a treat.

Talking to my friends after school was a given...does anyone remember hearing, "What on Earth could you possibly have to talk about for so long when you just saw each other all day in school??"

And then when I got old enough to have a guy friend, talking on the phone was elevated to a whole new level of importance.

Today talking on the phone seems to have lost its allure.  Most people, children and adults included, break out their phones to communicate via text, not by dialing a number.  I asked my son once why he didn't just call his girlfriend instead of texting her, and he said he doesn't like talking on the phone.

This morning I woke up thinking about one of my closest out-of-state friends.  We used to talk on the phone fairly regularly.  Now a'days we send each other e-mails, and we see each other at least once a year (usually).  We next to never talk on the telephone.  E-mail... yet another form of communication that has replaced the telephone call.

So, I'm curious:  Is the telephone becoming obsolete?  Do you use other forms of communication far more often than you make a call?  I know a lot of homes don't even have landlines anymore and I can't help but scratch my head and wonder, Who woulda' thunk it??