I saw three posts in a relatively short amount of time that reminded me of things we used to have or do when we were children (for me that was a looong time ago, for some of you, I know it really wasn't).

Lizbeth, at Just Dip it in Chocolate mentioned an old toaster, just like one my mom used to have in the house.  No we weren't so old that they were actually in style, but she had one and used it as a novelty once so we could see how it had been done.

Kenya from Here's the Thing was talking about the freedom she had growing up as a child; something we just cannot give our children today.

And Theresa from Theresa's Mixed Nuts left a comment on my post from yesterday about doggie bags (not the kind you take home from the restaurant). 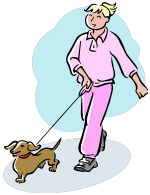 That got me to thinking how we took our dogs out for walks, because they loved it, when I was a kid.  And we never took a bag.  I distinctly remember being embarrassed if the pups had to make a stop, and I also remember that even when people saw it happening, and they did many times (boy did they, that was a nightmare of embarassment for a kid to endure), no one said a word.  Today's way is better, but it's just not something we did when I was a kid.

Then I started thinking of other things too.  For example, we had tablecloths when I was a kid.  In fact, rarely was a table set pretty without a nice tablecloth on top of it.  My grandmother had a drawer full of them (neatly folded next to the aprons).

A biscuit cutter was a staple in our kitchens.  The big silver kind with a wooden handle.  And everyone cooked their food from scratch, even their biscuits.

My mom had a hamburger press, and forming meat in it was fun (gross, I know, but at the time I thought it was a great thing to do, and it got me invovled in the kitchen work).

Wallpaper.  Everyone had wallpaper.  Even worse, some people had contact paper, the stick on wallpaper you could purchase as a cheap substitute to wallpaper. My mom had both, the latter of which she tried to repurpose a beautiful wood desk with...ohhh my.  I got my lack of craftiness from her, I'm sure of it, LOL! Though I never go for tacky... and that was very tacky.  I can say that, she's my mom, and she does a lot of other things right (decorating is not one of them).

Every house had a huge stereo system, and every stereo had a record player and dual cassette deck.

Water beds were a must if you were cool.

A lot of the popular furniture was ugly, of course back then they thought it was pretty... anyone remember that orange/brown wagon-wheel or windmill print (something like that) on a wood frame?

Classic wood rockers were in most every home, and I liked those.  I like them way better than today's glider, probably because my grandmother was so fond of hers, and I was fond of my Gram. :)

Everyone who had plants used a hanging macrame plant holder (and a lot of times that plant holder had a big overgrown fern in it).

Bathrooms had cushy seats, and carpeted floors.  Little sections of mirror were put together to make a design on the wall (we had the long vertical strips in some geometric shape).

Linoleum was not uncommon.

Maybe this was unique to my family, but everyone seemed to have a grandfather clock (I still like those, though we don't have one) or a thick wood clock in the shape of something, with gold numbers on it.

And of course the clothes, cars, toys, etc. all had their unique place too.

There are so many other things I can think of, with hardly even putting any thought into it.  What comes to mind for you, for things that used to be common in a home, but you just don't see anymore?
on February 25, 2013