Fluoride in Your Water? 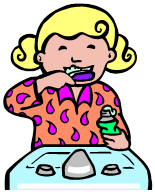 When we were in Florida, we lived in the city (not a lot of country where we were at), and never gave fluoride a second thought.  I do remember thinking from time to time how wonderful it was that none of us had ever gotten a cavity, but only in fleeting thoughts, nothing that I concentrated on for more than a second.

Now we're in the country, which I love, Love, LOVE, but there's no fluoride in the water.  AND our little one, who brushes a minimum of twice a day (three times a day before he started school) looks like he has a cavity starting!!!  The dentist will confirm it, but I have little doubt.  And I hate it.  He's pretty young to brave a dentist's chair for anything more than a cleaning, and even though getting a cavity filled won't hurt him, the fear that it might could make things a bit difficult, I already know.  Not attending to it would be far worse, but that's not something the little ones grasp so easily.

So that leaves me wondering what preventative options we have available to us, once the tooth is filled. I'm going to poke around the Internet a bit and ask the dentist too, but if you know of anything we can do to safely and adequately increase the fluoride we're getting, I'd sure love to hear it.  I'm assuming the difference is the water.  Our city had fluoride in the water, and it was something we took totally for granted, but now that we don't have it, and it's the only thing I can think of that we are doing different (as far as oral hygiene goes), I'm guessing it's the culprit.