I am a Smiley Girl.  What that means is that from time to time Smiley 360 will offer me a mission to do for fun.  This go around the mission was to try Campbell's Slow Kettle Style Soups.  In return, I was given a pair of cute red and blue socks for my 'ahhh' moment, a free full-sized sample of the soup, and some generous $2 off coupons.

When grocery shopping last week, I used a couple of my coupons, so we had several flavors on hand in addition the free sample we were given.  We decided to do the 'ahh moment,' which was to try the soup, the day before yesterday after we'd been outside playing in the snow. What better way to warm up than with soup, right?  So we came inside, I got snuggled up into my new chair, and asked hubby to take a picture of me enjoying my soup...with my new socks on, of course.

A few minutes later I walked into our library to find this scene: 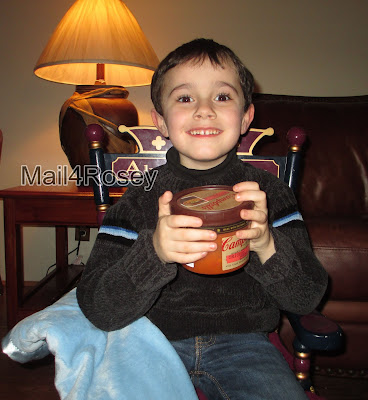 I told him if he was going to do it, he had to do it right, and that meant wearing the socks.  He was DELIGHTED to run off and get the too big, girly socks to wear for another picture.  It was fun, and he's cuter than I am anyway, so I am using his picture for the post. :)


I had to tell him several times to stop laughing or he was going to end up with soup on his lap!  We only heat his soup to barely warm (because he's five), but we do usually put him at the table to eat it, lol!  He wanted to sit in the recliner though, because I'd sat in mine for the review I was going to post, and he was trying to get it just right (that's my boy!).

I've mentioned before that my son could live off of soup if we'd let him, so even though this was his first time trying the Slow Kettle Style, I suspected he would like it.  And he did. 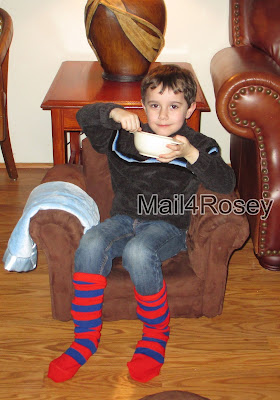 We took a couple more pictures and ushered him over to his little kiddy table to finish his soup.

You can heat your Campbell's Slow Kettle Style Soup up in the microwave, but we like to have ours heated on the stove (the directions say you can do either).  The soup was really delicious.  The Southwest-Style Chicken Chili I had was jam-packed with black beans (one of my favorites) and had just a touch of Jalepeno kick to it.  I'd like to tell you how my son's tasted, but he ate it all (I told you he could live off of soup).

Anyway, the soup was really good, and Smiley 360 has given me some to share with you.  If you're interested, enter on the Rafflecopter form below.  Four winners will get (2) coupons each.  Each coupon is good for $2 off of a single soup (good deal, right?).  This will give you a chance to try a couple of the flavors, at a big discount, so you can find the flavor you like best. US only.

Thank you to Campbell's Slow Kettle Style Soups and Smiley 360 for the mission.  You can learn more about the soup by visiting the website, and pick up a $1 coupon for a limited time here.  You can also follow them on Twitter and/or Tumblr.

Disclosure:  I received a pair of socks, coupons to give away, and a cup of soup to facilitate the review.  No other form of compensation took place.  All opinions stated are my own.