Baby, It's Cold Outside


I don't mind the snow. It's beautiful when it's falling, the kids LOVE it, and it can be downright fun.


What I do mind is driving on ice, and of course, every single year it ends up being a necessity, more than once. Having lived in south Florida for 18 years, where it never even gets cold, I think it's natural that it would take me some time to adjust to winter weather, and driving in it. But it's been 7 years now. I don't think I'm going to adjust to the latter.

Now to make matters worse, hubby's car is broken down.

I've mentioned it before that we differ on a lot of things, despite being gloriously, happily married. One of those is cars. When I was working (which was my whole life until recently), I had a new car...the warranty would go out and I would opt for an extended or trade-in for a new car. I like the security, I don't mind the payments.

Hubby is completely different. He thinks it's ridiculous to shell out the kind of money that it costs to get a new vehicle, and he won't do it. Well, I've been out of work for awhile now (5 1/2 yrs. to be exact). We opted to have one final child added to our family, and since we moved up north to a state where finding high paying work isn't so easy (I took a far less paying job and stayed until little man was born), we decided I'd stay home with him.

AWESOME decision. BUT, that meant hubby was solely in charge of finances (except for my bills, I write to pay my own bills, and I pay for our vacations)...and that meant no new car. Fortunately, I purchased a new vehicle right before we moved here and paid it off w/the sale of the house.  It's had a couple of problems here and there but is still running like a champ.  It's getting old though, just topped the 100k mark in miles (YIKES!). I'm not used to driving a car that's older and has no warranty.  It makes me nervous if I think about it.

Well now hubby's car has broken down. He's taken it to be fixed four times. FOUR times. And each day after getting it back (and shelling out the money to fix whatever got fixed) it has broken down w/the exact same symptom the very next day. No one can find what's wrong w/it. And so it's retired. Sitting in our driveway until hubby decides what to do with it. And that's instantly left us a one-car family.

That means I have to get up early, drive him to work, and then come back to drive the kids to school. 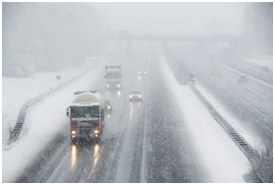 This morning we had the ice...everywhere. And I don't know if it's a budget thing or what, but the roads were not salted. The highway was a disaster with the wind blowing the snow from the median across the highway, and cars would be going fast and then drop speed so suddenly it left you worrying (validly) that the guy behind you was going to slam into you! Scary stuff. And I hate it, every single time. 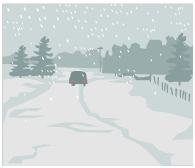 I read recently that people in the north live longer than any other region in the US. I think the reason for that must be the jump start to the heart that drivers get every winter, lol. For me it's downright scary, and when my vehicle starts fishtailing or sliding...all I can say is ugh. I took the back roads home from hubby's work this morning, so I could drive slow. But it was still scary.

The simple solution, of course, would be to move back to my beloved sunny Florida.  But hubby hates it there.  Despises it.  So it's just not an option.  He loves it here, and his family is here too.  And so I'll deal with the winter driving.  But I don't like it.  I don't think I'll ever like it.  Maybe we can be snowbirds...ah, the thought of it is even divine.  :)  Except of course, hubby doesn't like Florida, lol.
on January 31, 2013