The Eyes that Tingle 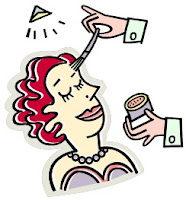 Just a note to my readers, this morning I was putting on my makeup when I noticed the skin under one of my eyes pulled a bit, aaaaaack!  A wrinkle?  Aaaack!  I was in the main bathroom of the house, the one that has my makeup (haha, 'makeup' is such an appropriate word, isn't it?), and I don't use moisturizer on a regular basis. In fact, I don't even use it annually, but I thought there must be some in the house... a sample, something, anything...after all, my mother and both of my grandmothers always had it in their bathrooms (sitting next to the cold cream that was also always there)...it's just something that's supposed to be in that room (illogical thinking, I know...a wrinkle will do that to you!), but no, nothing.  So I reached for what was in there, took off the lid and quickly applied it under both eyes.  It took about three seconds to realize Carmex Original Healing Ointment should never, never go under your eyes.  Really, you can just take my word for it.  :)

How about you?  Have you ever used something totally intended for another purpose and had it turn into an instant disaster?