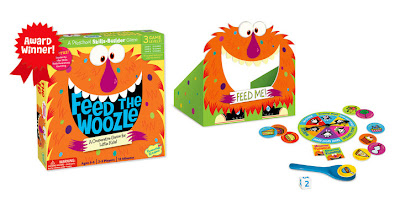 Peaceable Kingdom is a company that likes to give in terms of fun and innovation.  They are also a company that likes to give back (to their community), which can be seen on the "About Us" page of their website.  In addition to that, Peaceable Kingdom also embraces the use of environmentally friendly materials in the making of their products, using those that are sustainable and friendly to the world around us (such as FSC and recycled papers, soy-based ink, and corn-based plastics) when they are able.  And their products are fun.  What's not to love?

That being said, our family is big on games, and board games are a big hit in our house...IF they're fun.  We've recently come across one that we all like: Peaceable Kingdom's, Feed the Woozle.  Full of disgustingly funny (if you have kids, you know what I mean) food names like 'Toenail Toast' and 'Chocolate Covered Flies;' fun-filled actions (like spinning around, hopping, walking backwards, or my son's favorite, 'going crazy') all while balancing aforementioned food discs on a spoon; and trying to get to the open mouth of the Woozle without dropping your 'food,' this game is sure to be a hit in a house with little ones. 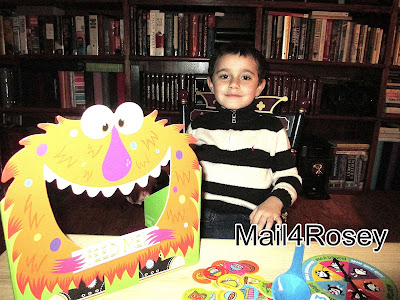 Set up is easy... You pop the cardboard discs and squares out of their frame.  My son took over the responsibility of that, happy to take part (& after seeing the box unopened for two days, he was ready to get things moving!).  Then you set up the cardboard 'Woozle' that just needs the supports on the back opened up, take out the spinner, and the chunky single die (this one is much larger than traditional sized dice, so far less likely to pose a choking hazard), and voilà the game is ready to go. 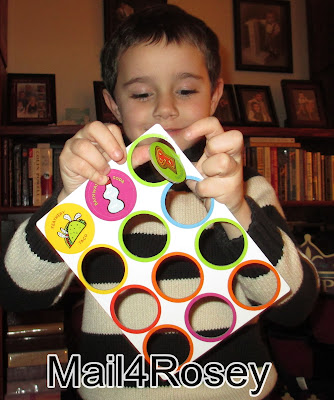 And then the fun begins.  We moved our rug out of the way (so little man wouldn't trip going backwards or spinning), and moved the table to the far end of the room so that the game could begin, but really you can play in most any space.  The game is cooperative instead of competitive, as each person tries to get the Woozle fed (he needs 12 snacks for the game to end in victory).  I think that aspect is great for easing the frustration of littler ones who might not be 'quite able to keep up' as you sometimes see in a traditional game setting.


No reading for this game made for 2-5 players, and it is recommended for children ages 3-6, but hubby and I had a good time playing too.  My husband is quite a character (and then some), so I think my son enjoyed his dad's antics of trying to 'bunny hop' with a spoon to get to the Wuzzle, more than he enjoyed hopping (or spinning, or what have you) on his own.  Feed the Woozle is an award-winning game,  and after playing I can see why (and so will you, once you play).

In addition to Feed the Woozle, Peaceable Kingdom also has four other new board games out right now:

Seeds for the Birds

Race to the Treasure

Snug as a Bug in a Rug

And the game we selected:
Feed the Woozle

All of these games look fun, and all are a great under-$20-gift-idea that you could give for Christmas.

One lucky Mail4Rosey winner is going to get to choose one of the games mentioned above (Thank you, Peaceable Kingdom!).  You can enter on the Rafflecopter form below, and good luck!  US entrants only.

Disclosure:  I received one board game for the purpose of conducting a review.  No other compensation changed hands and all opinions expressed are my own.