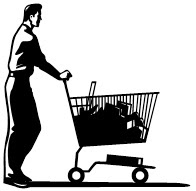 Hubby gets a blue ribbon (and a lotto ticket, but that's besides the point ;) ).  We went out to eat one night this week, and on the way home stopped at a store to get an air gauge for my car.  I was going to run in but hubby said, "I'll do it, it won't even take me five minutes."  Never one to shirk a bet with my husband, I jumped all over it.  "Lotto ticket?"  I asked coyly.  He smirked and nodded his head.  I told him to wait until the clock turned to the next number.  He said he didn't need the extra half a minute.  -_-


The store we were at was huge, and the tire gauges are way in the back. I knew I had the bet won before he even left the car.

Two and a half minutes later he emerged with a smile.
I locked the door so he couldn't get in (that was my favorite part :) ).

A big shout out & props to hubby, a man who shops faster than should be humanly possible (yet another glaring difference between the genders brought to light). ;)