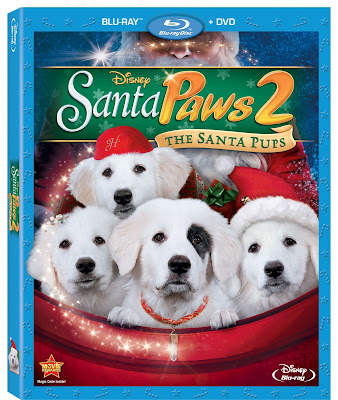 and Hilarious Movie Starring the Most Adorable Talking Pups on the Planet!
“SANTA PAWS 2: THE SANTA PUPS”

Burbank, Calif., July 13, 2012 — From the creators of the #1 live-action, direct-to-video
Disney  Buddies franchise, comes “SANTA PAWS 2: THE  SANTA PUPS,” an all-new
heartwarming and hilarious adventure starring a brand new  litter of the most adorable
talking Great Pyrenees pups! Premiering on Disney Blu-ray Combo Pack, DVD and Digital
on November 20, 2012,  “SANTA PAWS 2: THE  SANTA PUPS”  is  the  perfect  film  for the entire family to enjoy this coming Holiday Season!

These movies have become a holiday tradition for us.  I love them, my children love them, even my mother-in-law and youngest nephew come over to watch.  They are festive, touching, funny, and offer a quality lesson.

One lucky Mail4Rosey reader is going to win one before it even goes on sale!  The giveaway is a short one (Four Days Only!), which means better odds of winning than a traditional giveaway that runs 2 or 4 weeks (woo hoo!).  And because I have to have the winner's name to Disney very quickly, winner will only have 24 hours to get back to me with their mailing information, so keep your eyes open in your e-mail if you win this one, I'll need to hear back from you quickly.


Disclosure:  I received a copy of this DVD for review purposes, all opinions stated are my own.
on November 11, 2012