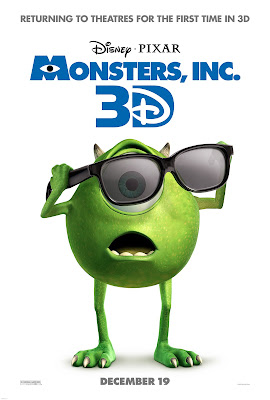 The brand-new trailer will be debuting tomorrow with iTunes Trailers!

MONSTERS, INC. is returning to U.S. theatres for the first time in 3D on December 19th!

The Academy Award®-winning animated comedy adventure “Monsters, Inc.” returns to the big screen—now in 3D—with lovable Sulley (voiced by John Goodman) and his wisecracking best friend Mike Wazowski (voiced by Billy Crystal) as they struggle to help a little girl named Boo (voiced by Mary Gibbs) find her way home from Monstropolis in the midst of a wild and mysterious cover-up.

Notes:
· “Monsters, Inc.,” originally released on November 2, 2001, was the highest grossing animated film at the global box office in 2001.
· On June 21, 2013, Disney•Pixar will unlock the door to a prequel, “Monsters University,” that tells the story of how Mike and Sulley met in college, overcame their differences and became the best of friends.

Disclosure:  This press release was sent to me from Disney to post at will.  No compensation was received.